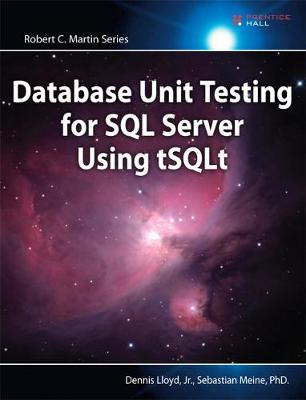 $42.28 (with VAT)
187.95 PLN / €40.30 / £34.98
Delivery to United States
check shipping prices
Forthcoming
Would you like to be informed when the book becomes available? Please provide your e-mail address and you will be the first to know:
Add to bookshelf

Using Test-Driven Development (TDD), thousands of agile developers are delivering software that is more rigorously tested, better designed, more robust, and easier to maintain. Until recently, however, database developers have been stymied by the unique characteristics of SQL code and the scarcity of useful tools. If you're an SQL Server developer who wants to use TDD, solutions now exist. In Database Unit Testing for SQL Server Using tSQLt, two pioneering database developers introduce those solutions and show you exactly how to apply them. Dennis Lloyd, Jr. and Sebastian Meine introduce their powerful new tSQLt open source unit testing framework for SQL Server, and show how to take full advantage of it.

Lloyd and Meine first explain the key TDD concepts that have made unit testing of non-database projects so effective, including isolating functions under test, using mocks to break up dependencies, and incrementally guiding designs. Next, they explain why these concepts haven't translated neatly to database development, and show how to overcome those disconnects. Then, building on this foundation, they introduce tSQLt and show you how to use it to create higher quality SQL Server code. Coverage includes:

4. How to Fit This in With the Rest of the App Development Process