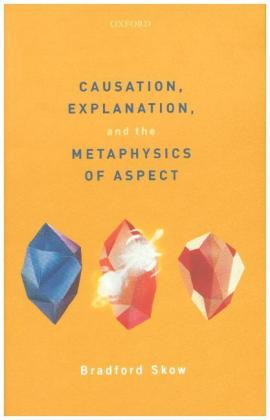 Causation, Explanation, and the Metaphysics of Aspect

When you light a match it is the striking of it which causes the lighting; the presence of oxygen in the room is a background condition to the lighting. But in virtue of what is the striking a cause while the presence of oxygen is a background condition? When a fragile glass breaks it manifests a disposition to break when struck; however, not everything that breaks manifests this disposition. So under what conditions does something, in breaking, manifest fragility? After some therapy a man might stop being irascible and he might lose the disposition to become angry at the slightest provocation. If he does then he will have lost the disposition after an "internal" change. Can someone lose, or gain, a disposition merely as a result of a change in its external circumstances? Facts about the structure of society can, it seems, explain other facts. But how do they do it? Are there different kinds of structural explanations? Many things are said to be causes: a rock, when we say that the rock caused the window to break, and an event, when we say that the striking of the window caused its breakage. Which kind of causation - causation by events, or causation by things - is more basic? In Causation, Explanation, and the Metaphysics of Aspect, Bradford Skow defends answers to these questions. His answers rely on a pair of connected distinctions: first is the distinction between acting, or doing something, and not acting; second is the distinction between situations in which an event happens, and situations in which instead something is in some state. The first distinction is used to draw the second: an event happens if and only if something does something. short but sweet ... this book is a quick, easy and rewarding read which draws interesting new links between topics that might have seemed to many readers to be unconnected. ... Anyone with a serious interest in metaphysics will find these discussions interesting and illuminating. * Alastair Wilson, Notre Dame Philosophical Reviews *

Causation, Explanation, and the Metaphysics of Aspect