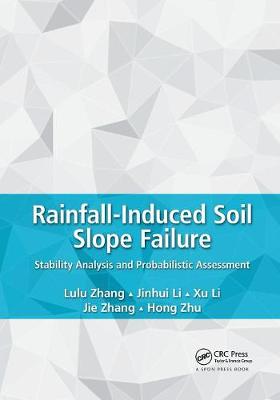 Rainfall-induced landslides are common around the world. With global climate change, their frequency is increasing and the consequences are becoming greater. Previous studies assess them mostly from the perspective of a single discipline-correlating landslides with rainstorms, geomorphology and hydrology in order to establish a threshold prediction value for rainfall-induced landslides; analyzing the slope's stability using a geomechanical approach; or assessing the risk from field records. Rainfall Induced Soil Slope Failure: Stability Analysis and Probabilistic Assessment integrates probabilistic approaches with the geotechnical modeling of slope failures under rainfall conditions with unsaturated soil. It covers theoretical models of rainfall infiltration and stability analysis, reliability analysis based on coupled hydro-mechanical modelling, stability of slopes with cracks, gravels and spatial heterogenous soils, and probabilistic model calibration based on measurement. It focuses on the uncertainties involved with rainfall-induced landslides and presents state-of-the art techniques and methods which characterize the uncertainties and quantify the probabilities and risk of rainfall-induced landslide hazards. Additionally, the authors cover: The failure mechanisms of rainfall-induced slope failure Commonly used infiltration and stability methods The infiltration and stability of natural soil slopes with cracks and colluvium materials Stability evaluation methods based on probabilistic approaches The effect of spatial variability on unsaturated soil slopes and more "The authors are to be commended for bringing together the many components related to rainfall induced landslides. I foresee that this book will be well-received by practicing engineers and researchers, and I believe that the book will form a reference book that is in demand in university libraries. I am sure that the book will be in demand and meet an important need." -Delwyn G. Fredlund, Professor Emeritus, University of Saskatchewan, Canada "This book concisely presents the fundamental mechanics behind rain-induced soil slope failures: rainfall infiltration in soil slopes, slope stability under rainfall infiltration, and hydro-mechanical coupled deformation. The concepts and analyses are presented clearly from the first principle with a strong physical sense. Some advanced topics, such as hydro-mechanical coupled numerical analysis in unsaturated soils, are approached in a plain manner with hand-on tutorials. The analysis of the