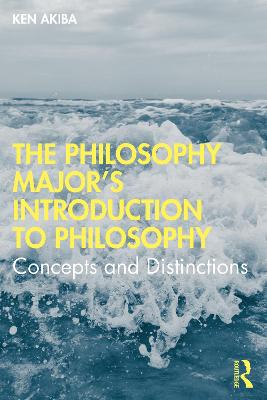 The Philosophy Major's Introduction to Philosophy: Concepts and Distinctions

Many philosophy majors are shocked by the gap between the relative ease of lower-level philosophy courses and the difficulty of upper-division courses. This book serves as a necessary bridge to upper-level study in philosophy by offering rigorous but concise and accessible accounts of basic concepts and distinctions that are used throughout the discipline. It serves as a valuable advanced introduction to any undergraduate who is moving into upper-level courses in philosophy. While lower-level introductions to philosophy usually deal with popular topics accessible to the general student (such as contemporary moral issues, free will, and personal identity) in a piecemeal fashion, The Philosophy Major's Introduction to Philosophy offers coverage of important general philosophical concepts, tools, and devices that may be used for a long time to come in various philosophical areas. The volume is helpfully divided between a focus on the relation between language and the world in the first three chapters and coverage of mental content in the final two chapters, but builds a coherent narrative from start to finish. It also provides ample study questions and helpful signposts throughout, making it a must-have for any student attempting to engage fully with the problems and arguments in philosophy. Key Features Integrates topics from various areas of philosophy, such as philosophy of language, metaphysics, epistemology, ethics, and philosophical logic Provides descriptions of logico-mathematical tools necessary for philosophical studies, such as propositional logic, predicate logic, modal logic, set theory, mereology, and mathematical functions Makes connections with modern philosophy, including discussions of Descartes's skepticism and dualism, Locke's theory of personal identity, Hume's theory of causation, and Kant's synthetic a priori Includes well-known entertaining puzzles and thought experiments such as the Ship of Theseus, the Statue and the Clay, a Brain in a Vat, and Twin Earth Lists helpful Exercise Questions and Discussion Questions at the end of each chapter and answers selected questions at the back of the book

The Philosophy Major's Introduction to Philosophy: Concepts and Distinctions

3. Analyticity, Apriority, and Necessity
3.1 Four Distinctions in Truths
3.2 Logical vs Non-logical Truths
3.3 Analytic vs Synthetic Truths
3.4 A Priori vs A Posteriori Truths
3.5 The Possible Worlds Analysis of Modality; Modal Logic
3.6 Metaphysical Modality; the Necessary Truth
3.7 Essence and Haecceity
3.8 The Puzzle about the Statue and the Clay
3.9 De Re and De Dicto Modality
3.10 'The Trinity Thesis'
3.11 Kant's Synthetic A Priori
3.12 Kripke's Necessary A Posteriori
3.13 Counterfactual Conditionals
3.14 Causation
3.15 Epistemic and Deontic Modality
3.16 Temporal Modality