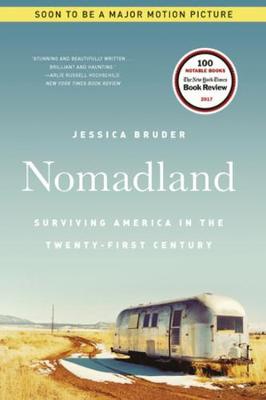 From the beet fields of North Dakota to the campgrounds of California to Amazon's CamperForce programme in Texas, American employers have discovered a new, low-cost labour pool, made up largely of transient older adults. These invisible casualties of the Great Recession have taken to the road by the tens of thousands in RVs and modified vans, forming a growing community of nomads.

Nomadland tells a revelatory tale of the dark underbelly of the American economy-one which foreshadows the precarious future that may await many more of us. At the same time, it celebrates the exceptional resilience and creativity of these Americans who have given up ordinary rootedness to survive but have not given up hope.

"Nomadland", Chloe Zhao's film, based on the book and starring Frances McDormand, is released on 5 December 2020 "Stirring reportage." -- O Magazine "A remarkable book of immersive reporting... Bruder is an acute and compassionate observer." -- Margaret Talbot - The New Yorker " Bruder is a poised and graceful writer." -- Parul Sehgal - The New York Times "[A] devastating, revelatory book." -- Timothy R. Smith - The Washington Post "Stunning and beautifully written... brilliant and haunting..." -- Arlie Russell Hochschild - The New York Times Book Review "A first-rate piece of immersive journalism." -- San Francisco Chronicle "At once wonderfully humane and deeply troubling, the book offers an eye-opening tour of the increasingly unequal, unstable, and insecure future our country is racing toward." -- Astra Taylor - The Nation "This [Nomadland] is not some lookie-loo movie, condescendingly imagining the poor: Zhao and McDormand did the legwork-as did journalist Jessica Bruder, whose book inspired the film-entering communities and engaging with them in order to better tell their stories." -- Vanity Fair "I thought the book ["Nomadland: Surviving America in the Twenty-First Century," by Jessica Bruder] was a very important document." -- David Strathairn - Los Angeles Times "Bruder's lively, thoroughly reported book of the same name..." -- AO Scott - The New York Times "Ms. Zhao based her screenplay on Jessica Bruder's 2018 book of the same name, an exceptional piece of nonfiction that emphasized social and economic upheaval in the wake of the Great Recession... Ms. Bruder's book staked out the territory and brought its shifting population to life with calm, empathetic reporting." -- The Wall Street Journal