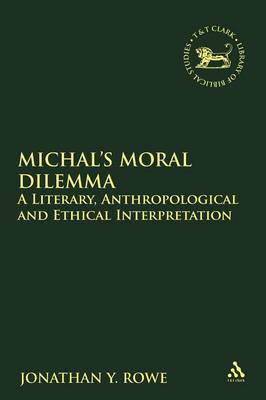 Michal's Moral Dilemma proposes that attention should be paid to the moral goods that feature in the text, before arguing that the family, a central feature of Old Testament morality, should be understood as a set of practices rather than an institution. Jonathan Rowe discusses the use of "models" of social action to comprehend the social world of the Bible, and suggests a modified version of Bakhtin's theory of heteroglossic voices can help readers appreciate how authors present a moral vision by approving some characters' actions whilst undermining others. The discussion of Michal's moral dilemma adduces anthropological theories and ethnographic data concerning violence, lying, and the relationship between fathers and daughters. Given that the conflicts of moral goods are "resolved" by characters choosing to act in a certain way, Rowe enquires after the author's assessment of each character's moral choices, arguing that Michal's loyalty to David and deception of Saul was counter-cultural. By approving of her choice the author affirms the importance of loyalty to the Davidic dynasty.

Figures
Abbreviations
INTRODUCTION
1. Michal's Moral Dilemma
2. Interpreting Michal's Dilemma
Chapter 1 OLD TESTAMENT MORALITY AND VALUE CONFLICT
1. Old Testament Resources for Value Conflict
a. Old Testament "Law"
b. Old Testament Legal Motivations
c. Old Testament Legal Sanctions
d. Natural Morality in the Old Testament
e. Imitation of God
2. Moral Goods in the Old Testament
a. Good in the Old Testament
b. The "Good Life"
3. Conclusion: Conflicting Moral Goods
Chapter 2 THE PRIORITY OF THE GOOD
1. Moral Goods
a. The Nature of Moral Goods
b. Good and Right
c. Moral Goods, Moral Rules and Moral Order
d. Incommensurability and Moral Goods
2. Kinship as a Moral Good
a. Kinship as the Matrix of Old Testament Morality
b. A "Familial Paradigm"
3. Conclusion: The Priority of Kinship
Chapter 3 ANTHROPOLOGICAL APPROACHES TO KINSHIP
1. Kinship
2. The Ethics of Kinship
3. The Practice of the Ethics of Kinship
a. Structure and Agency
b. Ambiguity
4. Conclusion: Choosing Kin
Chapter 4 UNDERSTANDIN GMORAL CHOICE IN 1 SAMUEL
1. Understanding Dialogical Voices
2. Interpretative Understanding
3. Conclusion: Interpreting Voices
Chapter 5 MICHAL: LYING THROUGH HER TERAPHIM
1. The Voices: Michal and Saul
2. Violence Against Enemies
a. Enemies in the Books of Samuel
b. Enemies and Violence-Anthropological Perspectives
c. Understanding David as "My enemy"
3. Fathers and Daughters
a. Michal: Saul's Daughter / David'sWife
b. Marriage-Anthropological Perspectives
c. Understanding Michal's Excuse
4. Lying and Deception
a. "You shall not bear false witness"
b. Lying-Anthropological Perspectives
c Understanding Michal's Lie
5. Michal's Voice Approved
a. A House, in the Night
b. Sending and Being Sent
c. Teraphim
d. Michal's Characterisation
Chapter 6 CONTRADICTING VALUES
Appendices
A Crime and Punishment in the Book of the Covenant
B Crime and Punishment in the Holiness Code
C Crime and Punishment in the Deuteronomic Code
Bibliography
Indices