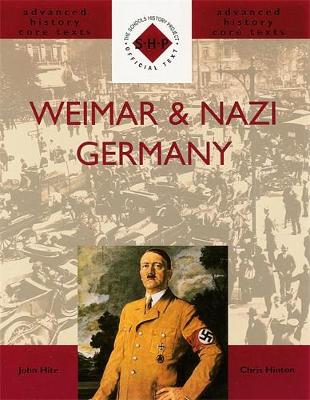 This title is a comprehensive core text investigating the history of Germany from the foundation of the Weimar Republic in 1918 to the collapse of the Nazi regime in 1945. It covers all the exam modules on twentieth-century Germany. Major themes include:
- Why Weimar democracy failed
- How Hitler rose to power
- How the Nazi regime affected people in Germany
- The successes and failures of Nazi foreign policy.

SECTION 1 Germany 1918-33: Why did Weimar democracy fail? PART 1.1 Weimar Germany 1918-23: Creation and crises 1 Was the Weimar Republic doomed from its very beginnings? 2 Why did the Weimar Republic survive the crises of 1919-13? PART 1.2 The Weimar Republic 1924-29: Years of recovery and achievement? 3 Did political and economic developments between 1924 and 1929 make the Weimar Republic more stable? 4 How far did Stresemann's foreign policy strengthen the Weimar regime? 5 Was the Weimar Republic undermined by jazz, art and dancing girls? PART 1.3 Germany 1929-33: Why did the Weimar Republic fail and Hitler gain power in 1933? 6 Was Weimar democracy undermined by the world economic depression? 7 Why did the Nazis become the largest party in Weimar Germany? 8 Why did parliamentary government decline in Germany 1930-33 and why was Hitler appointed Chancellor in January 1933? 9 Review: Interpretations of Weimar Germany 1918-33 SECTION 2 Germany 1933-45: What impact did Nazism have on the German people? PART 2.1 How did Hitler secure his regime? 10 Why was Hitler able to consolidate his position in power? 11 Where did power lie in the Third Reich? 12 How successful was Nazi economic policy? 13 What role did propaganda play in the Third Reich? PART 2.2 How far did Hitler succeed in creating a Volksgemeinschaft? 14 Did the Nazis succeed in winning the hearts and minds of German youth? 15 How successfully did the Nazis impose their ideology on German women? 16 Did the Churches collaborate with or resist the Nazi regime? 17 How much opposition was there to the Nazi regime? 18 Why did the Nazis commit mass murder? 19 Review: What impact did Nazism have on the German people? SECTION 3 Hitler's foreign policy: Why did Hitler's initial foreign policy successes turn to catastrophic defeat? 20 Why was Hitler's foreign policy so successful 1933-39? 21 Why did Germany's initial success in war turn to defeat? SECTION 4 Conclusion 22 The legacy of the Third Reich