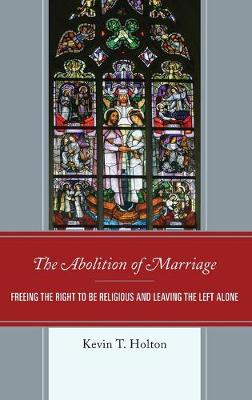 The Abolition of Marriage: Freeing the Right to be Religious and Leaving the Left Alone

The assault on traditional marriage that began in the late 1990s seemingly ended with the 2015 Obergefell v. Hodges decision legalizing same-sex marriages in all 50 states. Christians continue to mourn the "loss" of this sacred and covenantal institution to secularists, but in doing so have forgotten their unique place as citizens not of this world but of the Kingdom of God. Christian attempts to "correct" the standing constitutional order and reclaim marriage exclusively for heterosexuals will fail. The way forward is to advocate the replacement of civil marriage laws with civil unions for heterosexuals and homosexuals alike. Both Christians and secularists will find this alternative satisfying, for it allows everyone to receive from the state equal protection of their rights, and it allows the Church and other intermediary communal institutions to define and defend marriage as they have always understood it.

The Abolition of Marriage: Freeing the Right to be Religious and Leaving the Left Alone

The State Now Joins in Marriage

What the Church Joins Together

A Conflict of Goals

What's Love Got to Do With It?

The Covenant and Marriage

The Choice of Death or Life in Non-Sexual Relationships

The Choice of Death or Life in Sexual Relationships

The Family in Pluralistic America

No-Fault Divorce and the Decline of Civil Marriage

Christians and the Law of Civil Marriage

Marriage is for Heterosexuals

Argument from the Procreation and Child-Rearing Perspective

The Equal Opportunity of Love-the Need for Intimacy and Commitment

The Right to Rites for Left and Right

Has the Church Sold Out?

After Disestablishment, Then What?