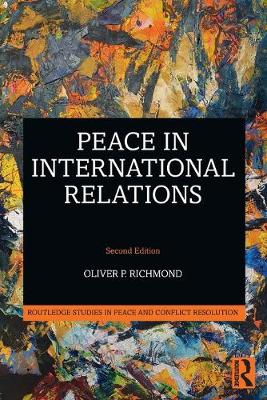 This updated and revised second edition examines the conceptualisation and evolution of peace in International Relations (IR) theory. The book examines the concept of peace and its usage in the main theoretical debates in IR, including realism, liberalism, constructivism, critical theory, and post-structuralism, as well as in the more direct debates on peace and conflict studies. It explores themes relating to culture, development, agency, and structure, not just in terms of representations of IR, and of peace, but in terms of the discipline of IR itself. The work also specifically explores the recent mantras associated with liberal and neoliberal versions of peace, which appear to have become foundational for much of the mainstream literature and for doctrines for peace and development in the policy world. Analysing war has often led to the dominance - and mitigation - of violence as a basic assumption in, and response to, the problems of IR. This study aims to redress this negative balance by arguing that the discipline offers a rich basis for the study of peace, which has advanced significantly over the last century or so. It also proposes innovative theoretical dimensions of the study of peace, with new chapters discussing post-colonial and digital developments. This book will be of great interest to students of peace and conflict studies, politics, and IR.


Part I: Towards and Orthodoxy of Peace- and Beyond


1. Peace and the Idealist Tradition: Towards a Liberal Peace


2. A Realist Agenda for Peace: Survival and a Victor's Peace


3. Marxist Agendas for Peace: Towards Peace as Social Justice and Emancipation


4. Beyond a Idealist, Realist, or Marxist Version of Peace


5. The Contribution of Peace and Conflict Studies