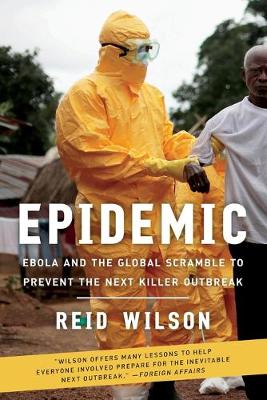 Epidemic: Ebola and the Global Scramble to Prevent the Next Killer Outbreak

A global health catastrophe narrowly averted. A world unprepared for another outbreak. In December 2013, a young boy in a tiny West African village contracted the deadly Ebola virus. The virus spread to his relatives, then to neighbouring communities, then across international borders. The world's first urban Ebola outbreak quickly overwhelmed the global health system and threatened to kill millions.

As we are currently seeing, in an increasingly interconnected world in which everyone is one or two flights away from New York or London or Beijing, a localized epidemic has become a pandemic. Ebola's spread through West Africa to Nigeria, the United Kingdom and the United States sounded global alarms that the next killer outbreak is right around the corner - and that the world is woefully unprepared to combat a new deadly disease.

From the poorest villages of rural West Africa to the Oval Office itself, this book tells the story of a deadly virus that spun wildly out of control - and reveals the truth about how close the world came to a catastrophic global pandemic. It is a story that serves as a cautionary tale for the COVID-19 epidemic currently spreading throughout the world. This is a thrilling read for anyone interested in international affairs, not merely scientists and those in public health. - CHOICE

"In this day and age, it's rare we take a breath and examine anything very thoroughly. And when it comes to resolving a crisis or looking at recent or just finished events, this lack of reflection can actually cause us more problems down the road. The beauty of Epidemic is how well Reid Wilson captures the urgency of the moment regarding the Ebola outbreak, not just as a tenacious detail-oriented journalist, but with the insight of an incredibly astute political and public affairs analyst. The lessons learned from how the world handled the Ebola outbreak won't just help us tackle the next global health crisis but explain how we navigate the challenges that come from rapid globalization overall." - Chuck Todd, Moderator of NBC's Meet the Press and political director, NBC News

"Wilson's Epidemic has the narrative pace of a thriller, with the incisive questions that everyone should be asking in the wake of the Ebola epidemic: What does it mean to be prepared? Who is responsible? How do we stay motivated amid a world in crisis? By shedding light on the world's response, Wilson forces us not only to ask, but answer these questions before it's too late." - Prabhjot Singh, Director, Arnhold Institute for Global Health, and Chair, Department of Health System Design and Global Health, Icahn School of Medicine at Mount Sinai Health System

"You don't need to be a scientist to be enthralled by Epidemic. But many will be because the story of the scientific and public health community's response will inform steps taken in the future to first discover and then combat every potential public health emergency. Reid Wilson also explores the political reactions to this crisis, which by turns were measured and unhinged. In politics doing the right thing is sometimes most difficult when everyone is watching. Epidemic tells that story briskly and brilliantly". - Major Garrett, White House Correspondent for CBS News and National Journal

"The 2013 Ebola outbreak in West Africa killed at least 11,000 people, mostly in Guinea, Liberia, and Sierra Leone. As this excellent book show, the international health community was woefully unprepared to address the epidemic. . . Much of the action in Wilson's book takes place in the United States, where the Obama administration led the effort to better understand and contain the epidemic. He also shows how nongovernmental organizations, such as Doctors Without Borders, played key roles on the ground in West Africa. Wilson offers many lessons to help everyone involved prepare for the inevitable next outbreak." - Nicolas van de Walle, Foreign Affairs

"An important cautionary book that is also oddly exhilarating. At a time when Americans are bombarded with nativism, it's refreshing to read about American volunteers who came through in a crisis affecting some of the poorest nations in the world." - Kirkus Reviews

Epidemic: Ebola and the Global Scramble to Prevent the Next Killer Outbreak