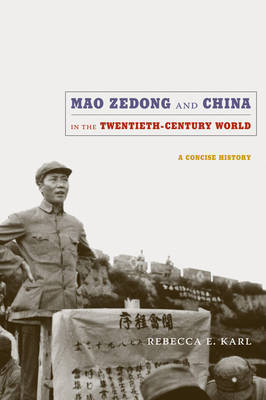 Mao Zedong and China in the Twentieth-Century World

Throughout this lively and concise historical account of Mao Zedong's life and thought, Rebecca E. Karl places the revolutionary leader's personal experiences, social visions and theory, military strategies, and developmental and foreign policies in a dynamic narrative of the Chinese revolution. She situates Mao and the revolution in a global setting informed by imperialism, decolonization, and third worldism, and discusses worldwide trends in politics, the economy, military power, and territorial sovereignty. Karl begins with Mao's early life in a small village in Hunan province, documenting his relationships with his parents, passion for education, and political awakening during the fall of the Qing dynasty in late 1911. She traces his transition from liberal to Communist over the course of the next decade, his early critiques of the subjugation of women, and the gathering force of the May 4th movement for reform and radical change. Describing Mao's rise to power, she delves into the dynamics of Communist organizing in an overwhelmingly agrarian society, and Mao's confrontations with Chiang Kaishek and other nationalist conservatives. She also considers his marriages and romantic liaisons and their relation to Mao as the revolutionary founder of Communism in China. After analyzing Mao's stormy tenure as chairman of the People's Republic of China, Karl concludes by examining his legacy in China from his death in 1976 through the Beijing Olympics in 2008. "Karl's history offers readers a chance to see China as Mao might have seen it. She implicitly begs the reader to ask, what might Mao, whose portrait still looks out over Tiananmen Square, have thought of China as it rises today? And perhaps more importantly, does it matter? Given the proliferation of interest and intrigue surrounding Mao Zedong's life, Karl's history included, the CCP has done wonders to maintain the authority he created while forsaking the China he imagined." - Angilee Shah, Zocalo Public Square '[A] reasonably balanced, clear-headed survey of the Great Helmsman's career and influence. . . . [I]f I had a class of young students approaching the period for the first time, I'd consider this book a not inappropriate textbook to hand them. And by the same measure it can also be recommended to the educated general reader." - Bradley Winterton, Taipei Times "Rebecca Karl's important new biography seeks to contextualize Mao within the history of his time, aiming to restore a degree of sanity in discussing his life and role, warts and all, as the father

Mao Zedong and China in the Twentieth-Century World