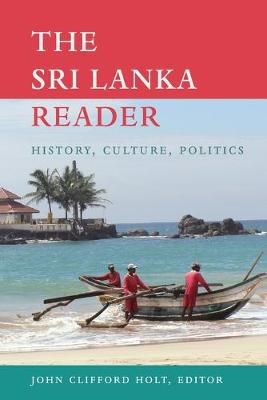 The Sri Lanka Reader is a sweeping introduction to the epic history of the island nation located just off the southern tip of India. The island's recorded history of more than two and a half millennia encompasses waves of immigration from the South Asian subcontinent, the formation of Sinhala Buddhist and Tamil Hindu civilizations, the arrival of Arab Muslim traders, and European colonization by the Portuguese, then the Dutch, and finally the British. Selected texts depict perceptions of the country's multiple linguistic and religious communities, as well as its political travails after independence in 1948, especially the ethnic violence that recurred from the 1950s until 2009, when the Liberation Tigers of Tamil Eelam were defeated by the Sri Lankan government's armed forces. This wide-ranging anthology covers the aboriginal Veddhas, the earliest known inhabitants of the island; the Kings of Kandy, Sri Lanka's last indigenous dynasty; twenty-first-century women who leave the island to work as housemaids in the Middle East; the forty thousand Sri Lankans killed by the tsunami in December 2004; and, through cutting-edge journalism and heart-wrenching poetry, the protracted violence that has scarred the country's contemporary political history. Along with fifty-four images of paintings, sculptures, and architecture, The Sri Lanka Reader includes more than ninety classic and contemporary texts written by Sri Lankans and foreigners.

I. From Ancient to Early Modern 9

The Portuguese: An Introduction / Jorge Flores 152

The Dutch: An Introduction 189

The British: An Introduction 230

Kandyan Culture in the Colonial Era: An Introduction 295

Christians and Burghers: An Introduction 559

Acknowledgment of Copyrights and Sources 735