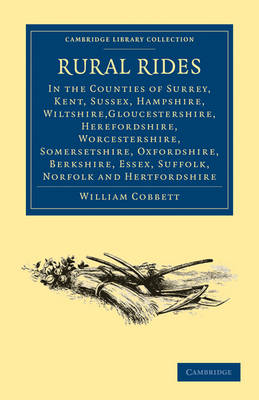 With a reported 8,000 people attending his funeral in 1835, William Cobbett (1763-1835) is remembered as one of the most vocal and committed champions of political reform in eighteenth- and nineteenth-century Britain. Returning to England in 1800 from self-imposed political exile, Cobbett was deeply shocked by the advances of the Industrial Revolution. The rural culture to which he was devoted was being destroyed and, a truly modern journalist, he suddenly desired 'to see the country, to see the farmers at home, and to see the labourers in the fields'. Cobbett rode through the towns and villages of England, giving voice to the plight of the oppressed labouring classes. His observations, first published in serial form between 1822 and 1826, were titled Rural Rides. They are an elegy to traditional agriculture, and one of the most extensive social commentaries ever published on agrarian life in the early nineteenth century.