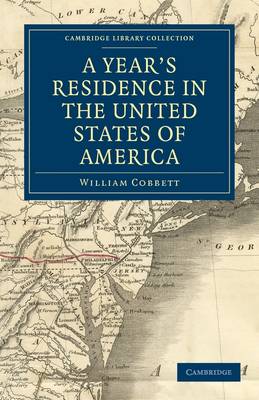 A Year's Residence in the United States of America: Treating of the Face of the Country, the Climate, the Soil... of the Expenses of Housekeeping... of the Manners and Customs of the People; and, of t

William Cobbett (1763-1835) was an English farmer and political reformer. He is best known for his Rural Rides (1830), also reissued in this series, which documents the life of nineteenth-century British agricultural workers and calls for social change. In 1816-7 Cobbett campaigned energetically for parliamentary reform, but when new anti-Radical legislation was passed he fled to North America and settled on a Long Island farm. This book, first published in 1818 and reissued here in its second edition (1819), contains Cobbett's account of his year in exile. It describes the climate, soil and crops he observed and the vegetables he grew, as well as the economics of farming in America. Part 2 discusses American customs, laws, and religion. Part 3 contains a description of the mid-West by Thomas Hulme, followed by Cobbett's rebuttal of Hulme's view of the 'Western Countries' as a desirable destination for emigrant British farmers.

A Year's Residence in the United States of America: Treating of the Face of the Country, the Climate, the Soil... of the Expenses of Housekeeping... of the Manners and Customs of the People; and, of t

Part I: General preface; 1. Description of the situation and extent of Long Island, and also of the face of the country, and an account of the climate, seasons, and soil; 2. Ruta Baga. Culture, mode of preserving, and uses of the Ruta Baga, sometimes called the Russian, and sometimes the Swedish, turnip; Part II: Dedication; Preface; 3. Experiments as to cabbages; 4. Earth-burning; 5. Transplanting Indian corn; 6. Swedish turnips; 7. Potatoes; 8. Cows, sheep, hogs, and poultry; 9. Prices of land, labour, working cattle, husbandry implements; 10. Expenses of housekeeping; 11. Manners, customs, and character of the people; 12. Rural sports; 13. Paupers and beggars; 14. Government, laws, and religion; Part III: Dedication; Preface; Mr. Hulme's introduction to his journal; Mr. Hulme's journal, made during a tour in the western countries of America, in which tour he visited Mr. Birkbeck's settlement; Mr. Cobbett's letters to Mr. Birkbeck, remonstrating with that gentleman on the numerous delusions, contained in his two publications, entitled 'Notes on a Journey in America' and 'Letters from Illinois'; Postscript, being the details of an experiment made in the cultivation of the Ruta Baga; Second postscript, a refutation of Fearon's falsehoods.