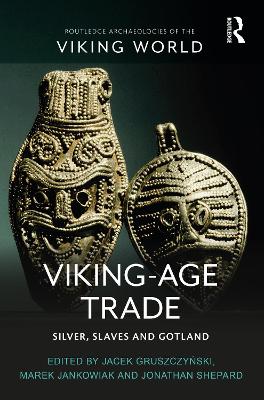 That there was an influx of silver dirhams from the Muslim world into eastern and northern Europe in the ninth and tenth centuries is well known, as is the fact that the largest concentration of hoards is on the Baltic island of Gotland. Recent discoveries have shown that dirhams were reaching the British Isles, too. What brought the dirhams to northern Europe in such large numbers? The fur trade has been proposed as one driver for transactions, but the slave trade offers another - complementary - explanation. This volume does not offer a comprehensive delineation of the hoard finds, or a full answer to the question of what brought the silver north. But it highlights the trade in slaves as driving exchanges on a trans-continental scale. By their very nature, the nexuses were complex, mutable and unclear even to contemporaries, and they have eluded modern scholarship. Contributions to this volume shed light on processes and key places: the mints of Central Asia; the chronology of the inflows of dirhams to Rus and northern Europe; the reasons why silver was deposited in the ground and why so much ended up on Gotland; the functioning of networks - perhaps comparable to the twenty-first-century drug trade; slave-trading in the British Isles; and the stimulus and additional networks that the Vikings brought into play. This combination of general surveys, presentations of fresh evidence and regional case studies sets Gotland and the early medieval slave trade in a firmer framework than has been available before.


PART I: COGS AND DRIVERS


2. Reading between the lines: Tracking slaves and slavery in the early middle ages


3. Slavery in medieval Scandinavia: Some points of departure


4. The fur trade in the early middle ages


5. The dynamics of the drugs trade: A model for the study of the medieval trade in slaves?


6. Dirham flows into northern and eastern Europe and the rhythms of the slave trade with the Islamic world


8. Coin circulation in early Rus and the dynamics of the druzhinas


10. Hoards and their archaeological context: Three case studies from Gotland


12. Silver hoards and society on Viking-Age Gotland: Some thoughts on the relationship between silver, long-distance trade and local communities


13. From the foreign to the familiar: The arrival and circulation of silver in Gotlandic society


14. Was there life before death? The Viking settlements on Gotland


15. Social structures and landscape: Gotland's silver hoards in the context of settlements


16. Gotland viewed from the Swedish mainland


17. Silver hoarding on Bornholm and Gotland: Hoards as windows onto Viking-Age life


18. Coins as an indicator of communications between the British Isles and Scandinavia in the Viking Age


20. Viking-Age bullion from southern Scandinavia and the Baltic region in Ireland


21. Some reflections on Gotland: Slavery, slave-traders, and slave-takers