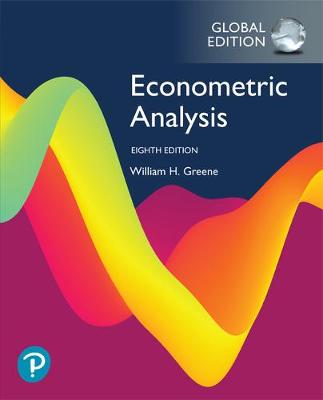 This title is a Pearson Global Edition. The Editorial team at Pearson has worked closely with educators around the world to include content which is especially relevant to students outside the United States.

For first-year graduate courses in Econometrics for Social Scientists.

Bridging the gap between social science studies and econometric analysis

Designed to bridge the gap between social science studies and field-econometrics, Econometric Analysis, 8th Edition, Global Edition, presents this ever-growing area at an accessible graduate level. The book first introduces students to basic techniques, a rich variety of models, and underlying theory that is easy to put into practice. It then presents students with a sufficient theoretical background to understand advanced techniques and to recognize new variants of established models. This focus, along with hundreds of worked numerical examples, ensures that students can apply the theory to real-world application and are prepared to be successful economists in the field.

PART I. The Linear Regression Model

9. The Generalized Regression Model and Heteroscedasticity

13. Minimum Distance Estimation and the Generalized Method of Moments

Appendix B: Probability and Distribution Theory