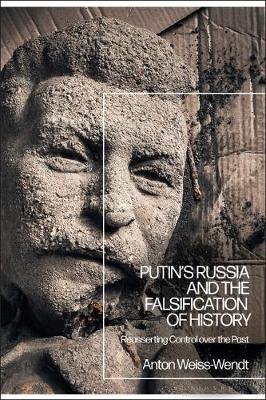 Putin's Russia and the Falsification of History

This book provides a bold examination of the political use of history in contemporary Russia. Anton Weiss-Wendt argues that history is yet another discipline misappropriated by the Kremlin for the purpose of rallying the population. He explains how, since the pro-democracy protests in 2011-12, the Russian government has hamstrung independent research and aligned state institutions in the promotion of militant patriotism. The entire state machinery has been mobilized to construe a single, glorious historical narrative with the focus on Soviet victory over Nazi Germany. Putin's Russia and the Falsification of History examines the intricate networks in Russia that engage in "historymaking." Whether it is the Holocaust or Soviet mass terror, Tsars or Stalin, the regime promotes a syncretic interpretation of Russian history that supports the notion of a strong state and authoritarian rule. That interpretation finds its way into new monuments, exhibitions, and quasi-professional associations. In addition to administrative measures of control, the Russian state has been using the penal code to censor critical perspectives on history, typically advanced by individuals who also happen to call for a political change in Russia. This powerful book shows how history is increasingly becoming an element of political technology in Russia, with the systematic destruction of independent institutions setting the very future of History as an academic discipline in Russia in doubt. The Putin regime is trying to rewrite history to suppress the memory of repression and to justify itself. In this book, Anton Weiss-Wendt draws on impressive research to provide a comprehensive guide to what is happening. The result is a resource for all those who understand that the truth about the past is the sine qua non for Russia's decent future. * David Satter, Author of It Was a Long Time Ago and It Never Happened Anyway: Russia and the Communist Past (2011). * Prof Weiss-Wendt demonstrates how Putin has succeeded in imposing a 'history politics' on his subjects that sacralises a mendacious version of World War II history whilst destroying Russia's pre-existing structures of historical research and education, themselves already compromised. His ultimate objective is seemingly to crush domestic dissent, discredit former vassal states Moscow wants to reabsorb, and draw Western democracies into a new 'Yalta' radically recasting European security arrangements. Weiss-Wendt's imposing analysis is objective and the tone courteous. But his summaries and co

Putin's Russia and the Falsification of History