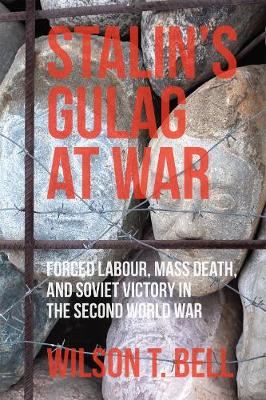 Stalin's Gulag at War places the Gulag within the story of the regional wartime mobilization of Western Siberia during the Second World War. Far from Moscow, Western Siberia was a key area for evacuated factories and for production in support of the war effort. Wilson T. Bell explores a diverse array of issues, including mass death, informal practices such as black markets, and the responses of prisoners and personnel to the war. The region's camps were never prioritized, and faced a constant struggle to mobilize for the war. Prisoners in these camps, however, engaged in such activities as sewing Red Army uniforms, manufacturing artillery shells, and constructing and working in major defense factories. The myriad responses of prisoners and personnel to the war reveal the Gulag as a complex system, but one that was closely tied to the local, regional, and national war effort, to the point where prisoners and non-prisoners frequently interacted. At non-priority camps, moreover, the area's many forced labour camps and colonies saw catastrophic death rates, often far exceeding official Gulag averages. Ultimately, prisoners played a tangible role in Soviet victory, but the cost was incredibly high, both in terms of the health and lives of the prisoners themselves, and in terms of Stalin's commitment to total, often violent, mobilization to achieve the goals of the Soviet state.