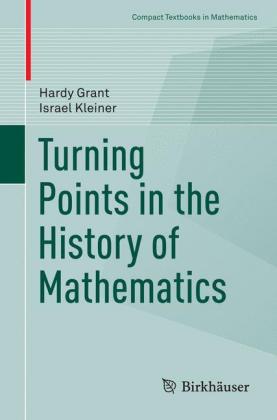 Turning Points in the History of Mathematics

$87.63 (with VAT)
389.55 PLN / €83.52 / £72.50
Delivery to United States
check shipping prices
Forthcoming
Would you like to be informed when the book becomes available? Please provide your e-mail address and you will be the first to know:
Add to bookshelf

This book explores some of the major turning points in the history of mathematics, ranging from ancient Greece to the present, demonstrating the drama that has often been a part of its evolution.  Studying these breakthroughs, transitions, and revolutions, their stumbling-blocks and their triumphs, can help illuminate the importance of the history of mathematics for its teaching, learning, and appreciation.

Some of the turning points considered are the rise of the axiomatic method (most famously in Euclid), and the subsequent major changes in it (for example, by David Hilbert); the "wedding," via analytic geometry, of algebra and geometry; the "taming" of the infinitely small and the infinitely large; the passages from algebra to algebras, from geometry to geometries, and from arithmetic to arithmetics; and the revolutions in the late nineteenth and early twentieth centuries that resulted from Georg Cantor's creation of transfinite set theory. The origin of each turning point is discussed, along with the mathematicians involved and some of the mathematics that resulted.  Problems and projects are included in each chapter to extend and increase understanding of the material. Substantial reference lists are also provided.

Turning Points in the History of Mathematics will be a valuable resource for teachers of, and students in, courses in mathematics or its history. The book should also be of interest to anyone with a background in mathematics who wishes to

learn more about the important moments in its development.

Turning Points in the History of Mathematics

Axiomatics - Euclid's and Hilbert's: From Material to Formal.- Solution by Radicals of the Cubic: From Equations to Groups and from Real to Complex Numbers.- Analytic Geometry: From the Marriage of Two Fields to the Birth of a Third.- Probability: From Games of Chance to an Abstract Theory.- Calculus: From Tangents and Areas to Derivatives and Integrals.- Gaussian Integers: From Arithmetic to Arithmetics.- Non-Euclidean Geometry: From One Geometry to Many.- Hypercomplex Numbers: From Algebra to Algebras.- The Infinite: From Potential to Actual.- Philosophy of Mathematics: From Hilbert to Gödel.- Some Further Turning Points.- Index.