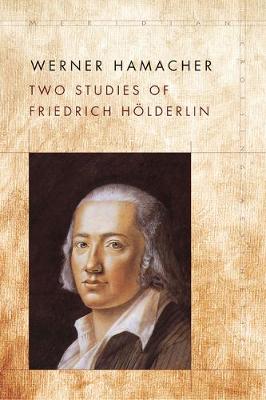 Two Studies of Friedrich Hoelderlin shows how the poet enacts a radical theory of meaning that culminates in a unique and still groundbreaking concept of revolution, one that begins with a revolutionary understanding of language. The product of an intense engagement with both Walter Benjamin and Jacques Derrida, the book presents Werner Hamacher's major attempts at developing a critical practice commensurate with the immensity of Hoelderlin's late writings. These essays offer an incisive and innovative combination of critical theory and deconstruction while also identifying where influential critics like Heidegger fail to do justice to the poet's astonishing radicality. Readers will not only come away with a new appreciation of Hoelderlin's poetic and political-theoretical achievements but will also discover the motivating force behind Hamacher's own achievements as a literary scholar and political theorist. An introduction by Julia Ng and an afterword by Peter Fenves provide further information about these studies and the academic and theoretical context in which they were composed.

Contents and AbstractsIntroduction: Versing, Ending: Hoelderlin in 1971 chapter abstractThe introduction describes the political and philosophical conditions in which Hamacher wrote his thesis, with particular attention to a series of debates in the late 1960s, including those inaugurated by Jacques Derrida's announcement of "the end of the book" and Pierre Bertaux's declaration that Hoelderlin was a genuine Jacobin. The introduction also locates the thesis within the context of the contested sphere of German literary studies, as it emerged at the Department of General and Comparative Literature founded by Peter Szondi at the Freie Universitat Berlin.


1Version of Meaning: A Study of Hoelderlin's Late Lyric chapter abstract"Version of Meaning" describes the course of Hoelderlin's late poetry from the problem of interpretation in the ode "Voice of the People," through certain fundamental alterations in the central stanza of "The Rhine," to the various versions of "The Only One," culminating in readings of "The Ister" and "Mnemosyne," along with corresponding poetological reflections, especially Hoelderlin's "Remarks" on Sophocles's plays. Rigorously analytic, the argument develops out of an intense critical engagement with Szondi, Adorno, Heidegger, and especially Walter Benjamin and Jacques Derrida, with, perhaps, certain concepts borrowed from Freud and Lacan in the background.


2Parousia, Stone-Walls: Mediacy and Temporality, Late Hoelderlin chapter abstractThe chapter begins with a careful analysis of the manner in which Hoelderlin undertook a critical transformation of both Kantian and Fichtean versions of transcendental idealism, with the result that he developed in his poetological writings from around 1800 an idea of parousia that, far from being indebted to an "original synthesis," is interrupted by moments of absolute non-synthesis, which cannot be identified or presented as such. The chapter then describes the consequences of Hoelderlin's reconceptualization of mediacy, communicability, and temporality for a selection of his late poetry, especially "Chiron," from which an image of time as "sideways" emerges, and "Half of Life," in which the moment of interruption and reversal takes shape in "stone-walls" that so fully lack language that they refuse all meaning-granting acts.


Afterword: Toward a "Non-Metaphysical 'Concept' of Revolution" chapter abstractThe aim of the afterword is to reflect on the difference between the first and second chapters, with particular attention to the importance of the theory of revolution in the first chapter and its near total absence in the second. Moving from the circumstances under which the first chapter was written; through its examination of certain "master thinkers," from Szondi to Derrida; to the circumstances under which Hamacher abandoned the project of expanding it into a book; the afterword concludes by showing that the second chapter responds in an unexpected manner to the initial project of deconstruction expressed at the opening of the first chapter. For Hamacher, Hoelderlin's image of "stone-walls," by utterly lacking language, constitute a "revolt" of the interpreted object and thus paradoxically suggest a non-human, earthward revolution.