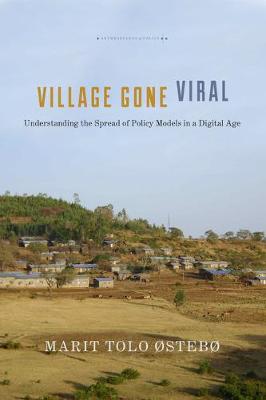 Village Gone Viral: Understanding the Spread of Policy Models in a Digital Age

In 2001, Ethiopian Television aired a documentary about a small, rural village called Awra Amba, where women ploughed, men worked in the kitchen, and so-called harmful traditional practices did not exist. The documentary radically challenged prevailing images of Ethiopia as a gender-conservative and aid-dependent place, and Awra Amba became a symbol of gender equality and sustainable development in Ethiopia and beyond. Village Gone Viral uses the example of Awra Amba to consider the widespread circulation and use of modeling practices in an increasingly transnational and digital policy world. With a particular focus on traveling models-policy models that become "viral" through various vectors, ranging from NGOs and multilateral organizations to the Internet-Marit Tolo Ostebo critically examines the hidden dimensions of models and model making. While a policy model may be presented as a "best practice," one that can be scaled up and successfully applied to other places, the local impacts of the model paradigm are far more ambivalent-potentially increasing social inequalities, reinforcing social stratification, and concealing injustice. With this book, Ostebo ultimately calls for a reflexive critical anthropology of the production, circulation, and use of models as instruments for social change.

Village Gone Viral: Understanding the Spread of Policy Models in a Digital Age

Contents and AbstractsIntroduction chapter abstractThe Introduction opens with a vignette that illustrates the traveling nature of policy models. This is followed by an outline of the book's overall argument and objectives and a brief synopsis of how models, in various forms, increasingly are used as policy instruments and in efforts aimed at generating social and behavioral change. I then introduce viral assemblage, a theoretical and analytical concept that can help us make sense of how ideas and models travel in an increasingly transnational and digital world. Finally, I move to a methodological section where, in addition to situating myself in the field, I discuss how the concept of viral assemblage can also help us make sense of the methods, processes, and products that we, as anthropologists, engage in and create.


1The Village chapter abstractIn Chapter 1, I first outline key characteristics of the Awra Amba community and its history, as commonly conveyed and globally known. I then transition to an ethnographic vignette that draws on one of my first visits to the community. In addition to introducing some of the ambivalences, paradoxes, and silences that spurred me to explore beyond and behind the official narrative, this account illustrates some of the methodological and ethical dilemmas I have faced while researching Awra Amba. The chapter ends with a discussion of these ambiguities.


2Ethiopia-The Real Wakanda? chapter abstractIn Chapter 2, I situate Awra Amba in a broader historical and political context. As I detail how development and gender-related policies have evolved in and been implemented in Ethiopia, I pay particular attention to the prominent role that models, in various forms, have played in shaping the political ideologies and policies of the various Ethiopian regimes. The current government has positioned itself as an independent developmental state, setting conditions for donor involvement. Nevertheless, I show how Ethiopia's development policies have been, and continue to be, influenced by global currents and policies. This is clearly reflected in the way that gender and women's rights issues are framed in the Ethiopian context.


3The Emergence of a Traveling Model chapter abstractBy situating Awra Amba within the broader model village paradigm and in relation to a nearby expert-initiated model village, Chapter 3 deconstructs the different parts that constitute the Awra Amba model and the various ways models come into being. I draw on Clifford Geertz's distinction between models for and models of and Richard Rottenburg's concept of traveling models to show how multiple models emerge in the Awra Amba case. I suggest that the power of the traveling model-its capacity to go viral-is conditioned on the existence of a representative model, which is produced and performed at a specific place or location and reflects the ideologies and emotional sentiments of its interacting audience, who picks it up and facilitates its circulation. In other words, the model for and a corresponding model of enable and produce the traveling model.


4Alayhim-A Potential Disruption chapter abstractWith a particular focus on Awra Amba's contested history, Chapter 4 further explores the dynamics of model making. I argue that model making within the global policy world, similar to that in fields such as science and economics, can best be understood as a process of idealization-of ordering a complex assemblage. This is a process in which actors who benefit from the model and its status as an ideal type accentuate certain desirable elements of a perceived reality, while erasing or silencing elements that create unwanted complexity. In the Awra Amba case, the disruptive elements are most clearly captured in its partly hidden past-in the community's historical and ideological links to a Sufi community known as Alayhim. I end the chapter with an analysis of why Alayhim, just like a virus, represents a threatening and potentially disruptive element.


5Modes of Transmission chapter abstractIn Chapter 5, I discuss the vehicles and infrastructure-the multiple pathways and the networks of actors and vectors-that have facilitated the spread of the Awra Amba model as a transnational model for gender equality and sustainable development. To use an epidemiological term, we can think of this as the traveling model's modes of transmission. While the Awra Amba case illustrates that the exchange of ideas between conventional policy actors during policy tours, workshops, and seminars remains important in terms of facilitating a model's virality, it also points to the importance of looking beyond conventional policy actors and infrastructure. The constant emergence of new actors, partnerships, and technologies in our increasingly globalized and digitalized world has radically changed the ways policy ideas and models come into being and then travel.


6Going Viral chapter abstractWhy do some models go viral, while others do not? What is it that has compelled the various vectors and carriers in the Awra Amba assemblage to pick up and spread the community's stories and values? These are the questions I explore in Chapter 6, where I expand current academic conversations on policy mobility and traveling models, examining stories told by people who have been "infected" by Awra Amba and as a result are transmitting and circulating the model. These stories reveal that affect and desire play a key role in fueling a model's virality. This is an aspect that the existing literature on policy mobility and traveling models has overlooked.


7Conditional Virality chapter abstractWith an empirical focus on Lyfta and the company's flagship product, The Awra Amba Experience, Chapter 7 sheds light on how emotions and empathy both fuel and limit Awra Amba's virality. Driven by a passion to foster global citizenship and empathy and to counter the negative and stereotypical images that dominate mainstream media, Lyfta's producers very consciously draw on the logics of affect in the creation and marketing of their product. Yet, the stories they have produced rely on and reify the stereotypes they intend to challenge. While it is often assumed that empathy is key to greater social justice, the commercialization of The Awra Amba Experience, along with the "othering" that underpins Lyfta's documentaries, produce exclusionary practices. This shows that empathy not only is insufficient for understanding power structures but it can also sustain and create them.


8Being a Model chapter abstractHow "authentic" are the official Awra Amba narratives? Is Awra Amba a place where gender equality is real? Chapter 8 sheds light on the effects that being chosen or identified as a model have on the model itself. I show how becoming a model has led to increased recognition, benefits, and preferential treatment for the community, contributing to infrastructural and economic improvements. Yet, it is also clear that the model status comes at a price: obligations, responsibilities, and pressures to engage in representational and performative strategies aimed at maintaining, controlling, and stabilizing the Awra Amba narrative. The community's status as a model limits the possibility of questioning and challenging inequalities and injustices, shaping a community that only partly reflects the idealized model for a just, gender-equal, and peaceful society depicted in common representations of Awra Amba.


Conclusion: Infected chapter abstractThe Conclusion opens with an ethnographic, self-reflective vignette that describes how I myself, eventually, became "infected" with the Awra Amba virus. By linking my fascination with Lyfta's products-particularly The Awra Amba Experience-to a pedagogical model I use in the classroom, I show how this infection was conditioned on and linked to my own identity and desires as an educator. Finally, I return to the meta-normative concerns that animate my work, drawing out the lessons to be learned from this case study and the relevance of viral assemblage for a context-sensitive, critical anthropology of traveling models.