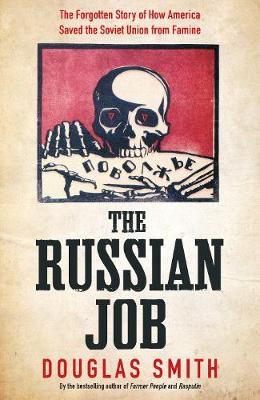 The Russian Job: The Forgotten Story of How America Saved the Soviet Union from Famine

'Brilliant, disturbing . . . an important story that needed to be told. A fast-moving and most compelling read.' - Helen Rappaport, author of Four Sisters and The Race to Save the Romanovs The gripping human story of how American volunteers fought famine in Bolshevik Russia, saving Lenin's revolutionary government from chaos and millions of people from starvation In 1921, after six years of unrelenting war and revolution, Russia was in ruins. The economy had collapsed, the country was ravaged by disease and starvation claimed the lives of millions. People were so desperate for food that there were reports of cannibalism, reports that were revealed to be horribly accurate. Remarkably, it was a young American aid worker who uncovered the truth and, even more remarkably, it was the US-backed charity that had sent him to Russia that would save Lenin's fledgling government by feeding his people. In The Russian Job, acclaimed historian Douglas Smith tells the gripping story of how an American charity fought the Russian famine. Backed by $20 million from the US government, and founded by Herbert Hoover, US Secretary of Commerce, the American Relief Administration recruited more than three hundred young Americans, many of them war veterans. They would oversee the distribution of food, clothing and medical supplies to people throughout Russia's vast landmass, saving millions of lives. Vividly written, with a rich cast of characters and a deep understanding of the period, The Russian Job shines a bright light on this strange and shadowy moment in history.

The Russian Job: The Forgotten Story of How America Saved the Soviet Union from Famine