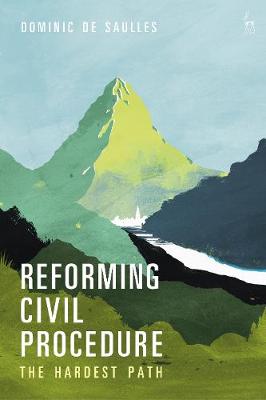 Drawing on political, social and economic theory, Reforming Civil Procedure focuses on the English civil justice system by looking at its history and its processes. The book considers the objectives of civil procedure and how it operates for and against particular societal groups, and what ideas and behaviours impact upon it. The reform of civil procedure has been beset with difficulties. Some are caused by questions of culture and mind-sets resistant to the changes, some by a confusion and conflict of values, some by overambitious reform efforts, some by a failure to follow through on purpose clauses, and some by swinging from laxity to rigidity with insufficient analysis. This book makes a strong contribution to the field by synthesising the work of English writers with different views, extending the work in England on the role of philosophy, values, process and culture in litigation, and engaging extensively with American writers who have not previously been the subject of much attention in English civil procedural studies.

History: America to 1938
1. Purposes and Functions
I. The Need for Theory
II. Complexity and Intertwining
III. The Function of Civil Procedure
IV. Society and the Courts
V. The Social World
VI. Pragmatism
VII. Management and Justice
VIII. The Function of the English Civil Justice System
IX. Reading the Rules
X. Conclusion
2. What is Civil Procedure For?
I. American Themes and Perspectives
II. English Themes and Perspectives
3. Intention, Action and Outcome in Anglo-American Civil Procedure
I. The Rules of the Supreme Court (1883 and 1965)
II. The Federal Rules of Civil Procedure (1938)
III. The Civil Procedure Rules 1998
4. Voyages in a New World: The Unanticipated Consequences of Civil Justice Reform
I. Introduction
II. History and a New Paradigm
5. Defending the Civil Justice System: The Function of Sanctions
I. Introduction
II. Systems
III. Analysis of Sanctions
IV. Reform of Sanctions
6. Process Costs and Error Costs: The Reform of Civil Appeals in Anglo-American Perspective
I. Introduction
II. Policy, Practicality and Proportionality
III. First Appeals - The New Regime
IV. Second Appeals - The New Regime