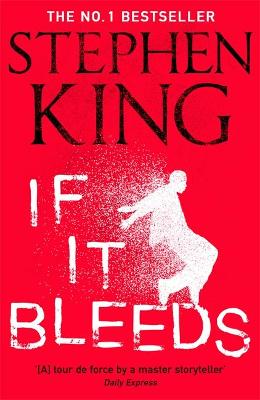 The eagerly awaited paperback edition of the No. 1 bestselling hardcover featuring a stand-alone sequel to The Outsider, and three additional irresistible novellas.

News people have a saying: 'If it bleeds, it leads'. And a bomb at Albert Macready Middle School is guaranteed to lead any bulletin.

Holly Gibney of the Finders Keepers detective agency is working on the case of a missing dog - and on her own need to be more assertive - when she sees the footage on TV. But when she tunes in again, to the late-night report, she realises something is not quite right about the correspondent who was first on the scene. So begins 'If It Bleeds', a stand-alone sequel to the No. 1 bestselling THE OUTSIDER featuring the incomparable Holly on her first solo case - and also the riveting title story in Stephen King's brilliant new collection.

Dancing alongside are three more wonderful long stories from this 'formidably versatile author' (The Sunday Times) - 'Mr Harrigan's Phone', 'The Life of Chuck' and 'Rat'. All four display the richness of King's storytelling with grace, humour, horror and breathtaking suspense. A fascinating Author's Note gives us a wonderful insight into the origin of each story and the writer's unparalleled imagination. Full of vividly drawn characters and unsettling themes, If It Bleeds is another tour de force by a master storyteller * Daily Express * Such glimpses into King's own mind are riveting and satisfyingly terrifying. Read the book for this * Evening Standard * The horror writer is at his familiar best with four suspenseful and sometimes surprisingly tender novellas... If It Bleeds brings together four new stories, all offering vintage King themes with their own particular twist... King, as always, is right on the money * Observer * The titular novella is...an impeccably judged whodunnit...the other three [are] readable, engaging studies of male lives at different stages * The Sunday Times * You may wonder if the great yarn spinner of the supernatural possesses psychic abilities of his own because this collection of short stories is so timely... Spine-chillingly brilliant * The People * You'll fly through IF IT BLEEDS * Daily Telegraph * You are drawn in immediately and kept guessing until the end * the Sun (On the audiobook) * Four wonderful stories * Press Association * full of vividly drawn characters ... another tour de force by a master storyteller * Daily Mirror * His achievements... are dazzling in scope... immensely enjoyable * London Review of Books * The straightforward cadences of King's voice, paired with his signature sit-down-and-let-me-tell-you-a-story style, were immediately soothing. And the stories he was telling - about the seductions and corruptions of technology, the extremes of beauty and depravity in even the most ordinary life, the workings of a universe we can never entirely understand - were somehow exactly what I wanted to read right now... As sirens blare outside my Brooklyn window and the headlines grow more apocalyptic by the day, I might start working my way through King's backlist. He's good company in the dark * New York Times * Four new, exceptionally compelling novellas that reaffirm his mastery of the form... stories that cover a surprising amount of emotional territory but can still be read in a sitting... King's affection for [Holly] is evident on every page... deeply empathetic and compulsively readable * Washington Post * The iconic author will keep you up late at night engrossed in four tales about our dreams and our frailties * USA Today * King is rightly acclaimed as one of the greatest - and most inventive - storytellers of our time and The Institute is a dazzling achievement * Daily Express (on The Institute) * A genuinely intriguing mystery, one that uses many of the tropes of both so-called "grip-lit" thrillers and more conventional forensics-driven crime fiction... The Outsider gives King fans exactly what they want * Guardian (on The Outsider) * One of the greatest storytellers of the past century...If you read only one thriller this summer, make it this one * Daily Mail (on The Outsider) *