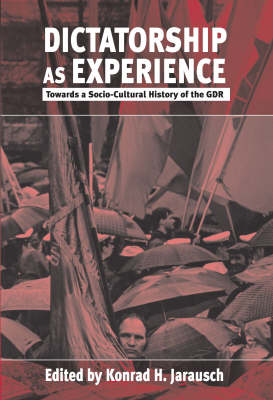 Dictatorship as Experience: Towards a Socio-Cultural History of the GDR

A decade after the collapse of communism, this volume presents a historical reflection on the perplexing nature of the East German dictatorship. In contrast to most political rhetoric, it seeks to establish a middle ground between totalitarianism theory, stressing the repressive features of the SED-regime, and apologetics of the socialist experiment, emphasizing the normality of daily lives. The book transcends the polarization of public debate by stressing the tensions and contradictions within the East German system that combined both aspects by using dictatorial means to achieve its emancipatory aims. By analyzing a range of political, social, cultural, and chronological topics, the contributors sketch a differentiated picture of the GDR which emphasizes both its repressive and its welfare features. The sixteen original essays, especially written for this volume by historians from both east and west Germany, represent the cutting edge of current research and suggest new theoretical perspectives. They explore political, social, and cultural mechanisms of control as well as analyze their limits and discuss the mixture of dynamism and stagnation that was typical of the GDR.

Dictatorship as Experience: Towards a Socio-Cultural History of the GDR

Introduction: Beyond Uniformity: The Challenge of Historicizing the GDR

PART I: THE THEORETICAL PROBLEM OF DICTATORSHIP

Chapter 1. The GDR: A Special Kind of Modern Dictatorship

Chapter 3. Care and Coercion: The GDR as Welfare Dictatorship

Chapter 4. From Dismantling to Currency Reform: External Origins of the Dictatorship, 1943-1948

Chapter 5. Foreign Influences on the Dictatorial Development of the GDR, 1949-1955

Chapter 6. Repression and Tolerance as Methods of Rule in Communist Societies

Chapter 9. The Myth of Female Emancipation: Contradictions in Women's Lives

Chapter 14. The Pivotal Cadres: Leadership Styles and Self-Images of GDR-Elites

Chapter 15. Stagnation or Change? Transformations of the Workplace in the GDR

Chapter 16. The Hitler Youth Generation in the GDR: Insecurities, Ambitions and Dilemmas

Chapter 17. Reforming Socialism? The Changing of the Guard from Ulbricht to Honecker during the 1960s

Chapter 18. Mobility and Blockage during the 1970s