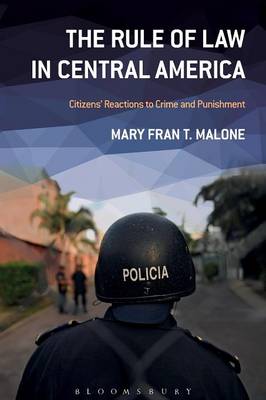 The Rule of Law in Central America: Citizens' Reactions to Crime and Punishment

The book is a thorough study that focuses on the impact of the current crime wave on citizens' respect for the law in countries such as Nicaragua, Panama, Costa Rica, Guatemala, El Salvador, and Honduras. The work opens with a brief review of the literature on the rule of law and legal socialization, followed by an historical overview of the democratization and justice reform in Central America from the 1990s to the present. Set as a comparative, micro-level study, the work then looks at an array of measures from citizens' toleration of government abuses of power to vigilante justice and the reporting of crime to police. Lastly, an empirical model is developed to predict citizens' attitudes, combining both these micro-level individual attributes with macro-level measures of institutional performance. A unique look at the process of democratization from a comparative perspective, Citizens' Support for the Rule of Law in Central America it will appeal to faculty, researchers, and students interested in Latin American politics, comparative politics, and democratic transition.

The Rule of Law in Central America: Citizens' Reactions to Crime and Punishment

1. The Rule of Law and the Challenge of the Crime Crisis
2. National Trends in Crime and Justice
3. Public Perceptions of Crime and Justice
4. Support for Extra Legal Justice
5. Reacting to Victimization
6. Privatizing Security
7. Conclusion
Appendix: Latin American Homicide Data Sources and Years
References