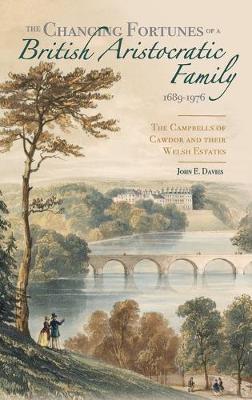 For over two hundred years, the Campbells of Cawdor were major landowners, industrialists and politicians. Originating in Nairnshire, Scotland, they moved in the late seventeenth century to south Wales, where they became the second largest landowner in Wales and owners of significant coal and lead mines. They participated politically in the British state as MPs, peers, lords of the admiralty including one first lord, treasury lords, admirals and army officers. They supported local good causes, were involved in London 'society' and were major art collectors. As such their story is fairly typical of many other aristocratic families in the period. This book traces the development of the family, its estates and activities from the late seventeenth to the late twentieth century. It shows how they established their wealth and power during the eighteenth century, the period when the landed aristocracy was at its height, how they responded in the nineteenth century to the moves towards more democratic forms of local and national government and how, despite the difficulties aristocratic families and estates faced in the twentieth century, they survived, selling off their Welsh lands and returning to their Scottish base, which remains a flourishing agricultural estate and tourist destination. JOHN E. DAVIES was the County Archivist for Carmarthenshire and is now an independent historical researcher. He completed his doctorate at Swansea University.

Introduction
Cawdor and Campbell
Estate administration
The agricultural estate: the Cawdors as farmers and landlords
The Cawdors as industrial landowners
The Cawdors in the community: church and education
The melee of local governance
The Cawdors in politics: interest building, consolidation and decline
Private and exclusive lives
The end of the Welsh estates
Conclusion
Bibliography