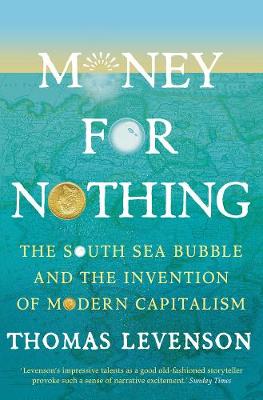 Money For Nothing: The South Sea Bubble and the Invention of Modern Capitalism

A Financial Times Economics Book of the Year A brilliant narrative of early capitalism's most famous scandal, a speculative frenzy that nearly bankrupted the British state during the hot summer of 1720 - and paradoxically led to the birth of modern finance.

The South Sea Company was formed to trade with Asian and Latin American countries. But it had almost no ships and did precious little trade. Instead it got into financial fraud on a massive scale, taking over the government's debt and promising to pay the state out of the money received from the shares it sold.

And how they sold. In the summer of 1720 the share price rocketed and everyone was making money. Until the carousel stopped, and thousands lost their shirts. Isaac Newton, Alexander Pope and others lost heavily.

Thomas Levenson's superb account of the South Sea Bubble is not just the story of a huge scam, but is also the story of the birth of modern financial capitalism: the idea that you can invest in future prosperity and that governments can borrow money to make things happen, like funding the rise of British naval and mercantile power. These dreamers and fraudsters may have bankrupted Britain, but they made the world rich.

Praise for Money For Nothing: 'A scholar who makes complicated and subtle matters not just accessible but fun. Utterly relevant to the 2008 financial crisis and 2020 pandemic' SIMON SEBAG MONTEFIORE

'A gripping story of scientists and swindlers, all too pertinent to our modern world' JAMES GLEICK

'It's easy to look back and think of the South Sea bubblers, like the tulip-mad Dutch of the 1630s, as financially naive - until you remember how many people jumped in on various other more recent crazes (from Beanie Babies to Pets.com and Bitcoin). This is not a new tale, but Levenson tells it with a light touch' SPECTATOR 'Superb, fascinating and totally timely, Money for Nothing is a gripping history of the South Sea Bubble by a scholar who makes complicated and subtle matters not just accessible but fun - the story of a world crisis with a flashy cast of grifters, scientists, politicians and charlatans that Levenson makes utterly relevant to the 2008 financial crisis and 2020 pandemic. Essential reading' -- Simon Sebag Montefiore 'Does a stockmarket crash and a plague sound somehow familiar? Leverson's new book is proof - very cleverly told - of how enlightening history can be. There is no excuse not to learn from the past' -- Andrea Wulf 'Inspired by Isaac Newton's example, clever schemers sought to conquer the chaos of human affairs by abstracting financial value from tangible goods. Their calculations unleashed the notorious South Sea Bubble, which destroyed fortunes and roiled nations. Thoroughly researched and vibrantly written, Money for Nothing captures those heady, heartbreaking times, which still hold lessons for today' -- David Kaiser 'Thomas Levenson is a brilliant synthesizer with a grand view of history. Here is the birth of modern finance amid catastrophe and fraud - a gripping story of scientists and swindlers, all too pertinent to our modern world' -- James Gleick 'A brilliant history of the South Sea Bubble, an astounding episode from the early days of financial markets that to this day continues to intrigue and perplex historians. Deeply researched and featuring a colorful cast of characters out of 18th century England - mathematical geniuses, unscrupulous financiers, greedy aristocrats, venal politicians - Money for Nothing is narrative history at its best, lively and fresh with new insights' -- Liaquat Ahamed 'This erudite and entertaining history offers a fresh take on high finance' * Publishers Weekly * 'An enthralling account of an economic revolution that emerged from a scandal' * Kirkus Reviews * 'Levenson is very fluent in his descriptions ... This is not a new tale, but Levenson tells it with a light touch' * Spectator * The book has helped me better understand a number of different institutions ... If you want an embarkation point from which to understand the history of the City of London as a financial rather than simply mercantile or population centre then this book is a useful one, and one to whet your appetite' * London Historian's Blog. * 'A vivid account of the development of share trading in the coffee shops of Exchange Alley in the City, with fascinating asides such as Newton's extraordinarily modern management techniques when running the Royal Mint ... A compelling read' * Financial Times. * 'Levenson is a talented writer' * Money Week * 'A beautifully written account of the seminal bubble of capitalism' * Financial Times * 'Levenson is a talented writer who does a good job explaining the complicated nature of the South Sea Company and how it paradoxically saved the British state from bankruptcy' * Money Week * 'Levenson explored the murky tale in a wide ranging study of political intrigue, cultural attitudes and - his strength as a historian of science - the emergence of mathematical reasoning about the value of assets' * BBC History Magazine * 'Levenson is very good on the deep history of the bubble ... Building on recent scholarship and especially the work of his MIT colleague William Deringer, Levenson proposes instead that we see the era's scientific accomplishments and speculative bubbles as equal manifestations of a newly mathematical way of knowing and being' * TLS *

Money For Nothing: The South Sea Bubble and the Invention of Modern Capitalism