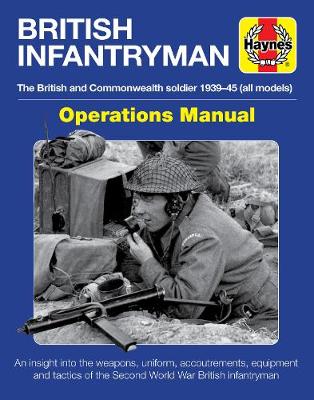 British soldiers, with their old-fashioned helmets, spring-powered PIAT anti-tank guns and veneration of heroic defeats, may have lost the propaganda war, but their record speaks for itself: they may have started badly in France in 1940 and the Far East in 1941, but they were victorious in the North African desert, in Europe and in India and Burma where the 'Forgotten Army' first held the Japanese and then inflicted at Imphal and Kohima the greatest loss to the Japanese on land. They held back the might of the Panzers in Normandy in 1944, chased the Germans back into Holland and came within a whisker at Arnhem of circumventing the Siegfried Line, and won battle after battle against a fanatical defence on their way to final victory. This book doesn't cover the progress of the Second World War, but looks in detail at the weapons, uniform, accoutrements, equipment and tactics of the Second World War British infantryman, following the themes of the Haynes Great War British Tommy and German Infantryman Manuals.

Chapter 1 The lessons of WW1 The Hundred Days, pacifism; interwar doctrinal theories: Fuller, mechanised warfare and the cavalry; the arms race of the 1930s; and the birth of the Paras.

Chapter 2 Organisation The army of empire: Australia, Canada, India; the organisation of the army and how it changed during the war; manpower crises, arms and services; the regimental system; new arms: the Paras, Commandos, the Territorials, and Dad's Army.

Chapter 9 Tactics Introduction, in the attack; the squad in combat; in the defence; airpower; artillery; tanks.