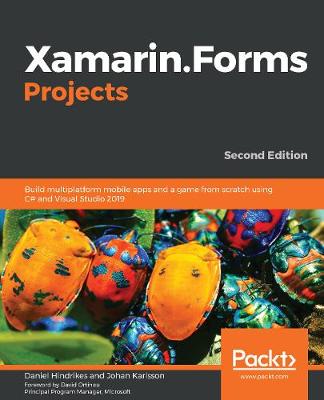 Learn to build cross-platform mobile apps using the latest features in Xamarin.Forms 4 with the help of a series of projects including apps for real-time chatting, AR games, location-tracking, weather, photo galleries, and much more Key Features Develop mobile apps, AR games, and chatbots of varying complexity with the help of real-world examples Explore the important features of Xamarin.Forms 4 such as Shell, CollectionView, and CarouselView Get to grips with advanced concepts such as AR and VR and machine learning for mobile development Book DescriptionXamarin.Forms is a lightweight cross-platform development toolkit for building apps with a rich user interface. Improved and updated to cover the latest features of Xamarin.Forms, this second edition covers CollectionView and Shell, along with interesting concepts such as augmented reality (AR) and machine learning. Starting with an introduction to Xamarin and how it works, this book shares tips for choosing the type of development environment you should strive for when planning cross-platform mobile apps. You'll build your first Xamarin.Forms app and learn how to use Shell to implement the app architecture. The book gradually increases the level of complexity of the projects, guiding you through creating apps ranging from a location tracker and weather map to an AR game and face recognition. As you advance, the book will take you through modern mobile development frameworks such as SQLite, .NET Core Mono, ARKit, and ARCore. You'll be able to customize your apps for both Android and iOS platforms to achieve native-like performance and speed. The book is filled with engaging examples, so you can grasp essential concepts by writing code instead of reading through endless theory. By the end of this book, you'll be ready to develop your own native apps with Xamarin.Forms and its associated technologies, such as .NET Core, Visual Studio 2019, and C#. What you will learn Set up Xamarin.Forms to build native apps with code-sharing capabilities Understand the core aspects of developing a mobile app, such as its layout, UX, and rendering Use custom renderers to gain platform-specific access Discover how to create custom layouts for your apps with Xamarin.Forms Shell Use Azure SignalR to implement serverless services in your Xamarin apps Create an augmented reality (AR) game for Android and iOS using ARCore and ARKit, respectively Build and train machine learning models using CoreML, TensorFlow, and Azure Cognitive Services Who this book is forThis book is for C# and .NET developers who want to learn Xamarin.Forms and get started with native Xamarin mobile application development from the ground up. Working knowledge of Visual Studio will help you to get the most out of this book.