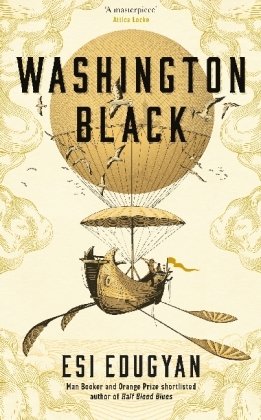 SHORTLISTED FOR THE MAN BOOKER PRIZE 2018

WINNER OF THE GILLER PRIZE

'A masterpiece' Attica Locke
'Strong, beautiful and beguiling' Observer
'Destined to become a future classic ... that rare book that should appeal to every kind of reader' Guardian

When two English brothers take the helm of a Barbados sugar plantation, Washington Black - an eleven-year-old field slave - finds himself selected as personal servant to one of them. The eccentric Christopher 'Titch' Wilde is a naturalist, explorer, scientist, inventor and abolitionist, whose single-minded pursuit of the perfect aerial machine mystifies all around him.
Titch's idealistic plans are soon shattered and Washington finds himself in mortal danger. They escape together, but then Titch disappears and Washington must make his way alone, following the promise of freedom further than he ever dreamed possible.
Inspired by a true story, Washington Black is an extraordinary tale of a world destroyed and made whole again. Washington Black is a profoundly humane story about false idols, the fickleness of fortune and whether a slave, once freed, can ever truly be free. * The Times * A lush, exhilarating travelogue reminiscent of Jules Verne . . . Edugyan, like her hero, can paint an indelible scene * New Yorker * A full-pelt adventure story featuring hot-air balloon crashes, blizzards in the Arctic, scientific discovery, knife fights in dark alleys, bounty hunters and forbidden romance * Sunday Times * Washington Black is a brilliantly absorbing picaresque; a book that combines the unflinching depiction of violence with a lyrical, hallucinatory beauty. -- Sandra Newman Wondrous ... gripping ... vivid and captivating * Economist * Magnificent and strikingly visual prose * Financial Times * Washington Black is a gripping adventure and an atmospheric portrayal of 1830s society at both the fringes of the world and the heart of the British Empire -- John Boyne A pacey yet thoughtful exploration of freedom, and our moral compulsion to act * Spectator * Exquisite -- Boris Kachka * New York Magazine * An engrossing hybrid of 19th-century adventure and contemporary subtlety, a rip-roaring tale of peril imbued with our most persistent strife . . . Edugyan is a magical writer * Washington Post * A towering achievement . . . Edugyan is one of our sharpest and deepest writers of historical fiction * Entertainment Weekly * Edugyan's genius here is that she's found an urgent, fresh way of writing the antebellum novel . . . A romping yarn, beautifully and evocatively written, the narrative spinning along at a glorious pace. -- Lucy Scholes * The National * Astonishing . . . Washington Black's presence in these pages is fierce and unsettling. His urge to live all he can is matched by his eloquence. * The New York Times * In a story that is escapist, as well as poignant and political, Edugyan enjoys taking her readers where they are least expecting to go . . . Like the best historical fiction, it shines a light on the present as well as the past. * Irish Independent * Washington Black is made vivid by Esi Edugyan's gifts for language and character, and by the strength of her story ... The reader feels honoured and moved to have kept Wash company on his journeying * New Statesman * At the core of this novel, with its searing, supple prose and superb characters, is a visceral depiction of the abomination of slavery. Yet, as importantly, it explores an unlikely friendship, the limits to understanding another's suffering, the violence lurking in humans and the glories of adventure in a world full of wonders. -- Elizabeth Buchan * Daily Mail *