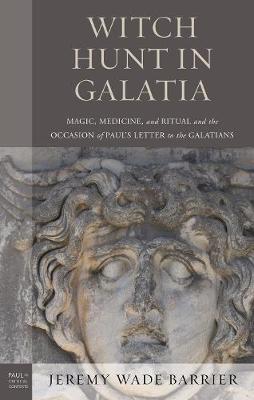 Witch Hunt in Galatia: Magic, Medicine, and Ritual and the Occasion of Paul's Letter to the Galatians

Approximately 2,000 years ago, some Jewish communities of Galatia in central Asia Minor believed they had fallen under a curse, argues Jeremy Wade Barrier. A fellow Jew named Paul wrote the letter we call Galatians to help them escape its effects. In the letter, Barrier argues, Paul called for the Jews in Galatia to stop practicing circumcision. The rite had fallen into disuse within many Jewish communities in the Roman Empire, but Barrier argues the Galatian Jews believed it was a talisman that would protect them from harm. As a further precaution, they needed to deal with the person who had brought this evil to their community. A witch hunt was underway, and some had concluded that the witch was none other than Paul. Barrier provides a reconstruction of the original occasion of Paul's letter to the Galatians and shows how Paul defended himself from accusations of witchcraft by countering that the ritual that would protect them from the "Evil Eye" was not circumcision, but rather baptism. Through the ritual of baptism, they could receive healing from a material, yet divine, "breath" of God. Barrier also reconstructs an earlier understanding of this pneuma that was lost to subsequent Christianity under the influence of Neoplatonism.

Witch Hunt in Galatia: Magic, Medicine, and Ritual and the Occasion of Paul's Letter to the Galatians

Part One: Paul's Perspective on Medicine and Physiology in Galatians

4. Evil Eye in a Cultural-anthropological Context

5. The Evil Eye and Fascinum in Galatians

6. Physiological Pneuma and the Doctrine of the Trinity: From Paul to Augustine

7. Physiological Pneuma in the Apocryphon of John