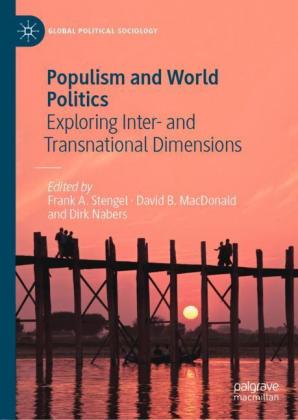 This volume is the first to analyze populism's international dimension: its impact on, and interaction with, foreign policy and international politics. The contributions to this volume engage conceptual theoretical issues and overarching questions such as the still under-specified concept of populism or the importance of leadership and the mass media for populism's global rise. They zoom in on populism's effect on both different countries' foreign policies and core international concerns, including the future of the liberal world order and the chances for international conflict and cooperation more generally.

Introduction: Analyzing the Nexus Between Populism and International Relations

Frank A. Stengel, David B. MacDonald and Dirk Nabers

Populism Beyond the Nation

How to Become a Leader: Identifying Global Scripts for Populist Leadership

Dirk Nabers and Frank A. Stengel

"Between Populism and Pluralism: Winston Peters and the International Relations of New Zealand First"

Conceptualizing the Links between Populism, Nationalism and Foreign Policy: How Modi Constructed a Nationalist, Anti-establishment Electoral Coalition in India

The Liberal International Order and its Populist Adversaries in Russia, UK and USA

The global rise of populism as a socio-material phenomenon: a material-discursive entanglements in the construction of genetically modified organisms in the European Union

Populism and Trade: The 2016 US Presidential Election and the Death of the Trans-Pacific Partnership