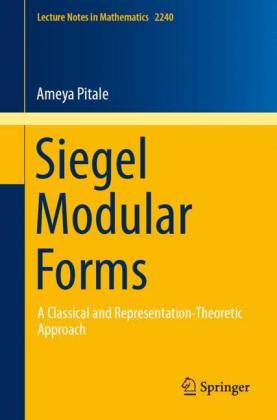 $78.89 (with VAT)
350.70 PLN / €75.19 / £65.27
Delivery to United States
check shipping prices
Forthcoming
Would you like to be informed when the book becomes available? Please provide your e-mail address and you will be the first to know:
Add to bookshelf

This monograph introduces two approaches to studying Siegel modular forms: the classical approach as holomorphic functions on the Siegel upper half space, and the approach via representation theory on the symplectic group. By illustrating the interconnections shared by the two, this book fills an important gap in the existing literature on modular forms. It begins by establishing the basics of the classical theory of Siegel modular forms, and then details more advanced topics. After this, much of the basic local representation theory is presented. Exercises are featured heavily throughout the volume, the solutions of which are helpfully provided in an appendix. Other topics considered include Hecke theory, Fourier coefficients, cuspidal automorphic representations, Bessel models, and integral representation.

Graduate students and young researchers will find this volume particularly useful. It will also appeal to researchers in the area as a reference volume. Some knowledge of GL(2) theory is recommended, but there are a number of appendices included if the reader is not already familiar.