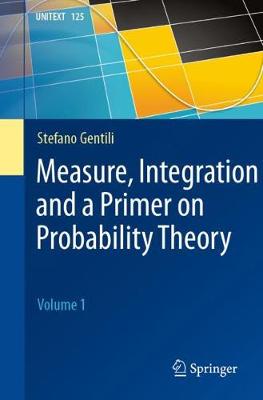 Measure, Integration and a Primer on Probability Theory: Volume 1

$98.26 (with VAT)
436.80 PLN / €93.65 / £81.30
Delivery to United States
check shipping prices
Forthcoming
Would you like to be informed when the book becomes available? Please provide your e-mail address and you will be the first to know:
Add to bookshelf

The text contains detailed and complete proofs and includes instructive historical introductions to key chapters. These serve to illustrate the hurdles faced by the scholars that developed the theory, and allow the novice to approach the subject from a wider angle, thus appreciating the human side of major figures in Mathematics. The style in which topics are addressed, albeit informal, always maintains a rigorous character. The attention placed in the careful layout of the logical steps of proofs, the abundant examples and the supplementary remarks disseminated throughout all contribute to render the reading pleasant and facilitate the learning process. The exposition is particularly suitable for students of Mathematics, Physics, Engineering and Statistics, besides providing the foundation essential for the study of Probability Theory and many branches of Applied Mathematics, including the Analysis of Financial Markets and other areas of Financial Engineering.

Measure, Integration and a Primer on Probability Theory: Volume 1