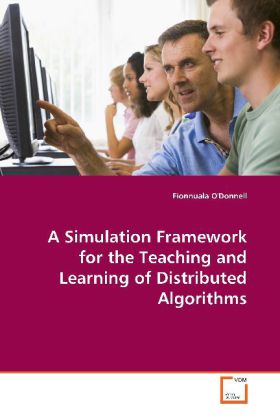 $132.03 (with VAT)
586.95 PLN / €125.84 / £109.24
Delivery to United States
check shipping prices
Forthcoming
Would you like to be informed when the book becomes available? Please provide your e-mail address and you will be the first to know:
Add to bookshelf

A spectrum of algorithm animation systems has evolved
for the teaching and learning of distributed
algorithms. These have ranged from passive animation
systems, which provide multiple prepared views of an
algorithm s process for a learner to view, stop,
pause, step through or rewind, through active
simulation systems, which enable a learner to affect
changes to the behavior of an algorithm during
execution, to algorithm construction systems, which
enable a learner to create an animation of an
algorithm s behavior. However, these systems have
failed to catch on in mainstream computer science
education. This is because each system suffers from
one or more shortcomings: lack of real time
engagement with an algorithm s content, an
under-developed model of pedagogy, time and effort
required to build an algorithm simulation, and lack
of evidence to support its pedagogical effectiveness.
This book presents an algorithm animation system
(FADA) which is designed to address the
aforementioned challenges.