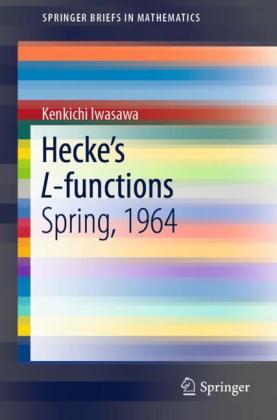 $95.66 (with VAT)
425.25 PLN / €91.17 / £79.15
Delivery to United States
check shipping prices
Forthcoming
Would you like to be informed when the book becomes available? Please provide your e-mail address and you will be the first to know:
Add to bookshelf

This volume contains the notes originally made by Kenkichi Iwasawa in his own handwriting for his lecture course at Princeton University in 1964. These notes give a beautiful and completely detailed account of the adelic approach to Hecke's L -functions attached to any number field, including the proof of analytic continuation, the functional equation of these L -functions, and the class number formula arising from the Dedekind zeta function for a general number field. This adelic approach was discovered independently by Iwasawa and Tate around 1950 and marked the beginning of the whole modern adelic approach to automorphic forms and L -series. While Tate's thesis at Princeton in 1950 was finally published in 1967 in the volume Algebraic Number Theory , edited by Cassels and Frohlich, no detailed account of Iwasawa's work has been published until now, and this volume is intended to fill the gap in the literature of one of the key areas of modern number theory. In the final chapter, Iwasawa elegantly explains some important classical results, such as the distribution of prime ideals and the class number formulae for cyclotomic fields.