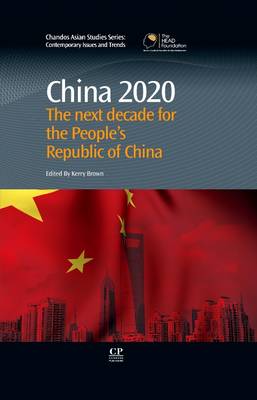 China 2020: The Next Decade for the People's Republic of China

This book presents eight separate essays and provides the reader with a unique perspective and objective judgement of where China will stand by the end of the current decade. It is suitable reading for foreign policy practitioners, academics and anyone interested in one of the world's fastest-developing countries. The eight essays cover the following topics: China's internal politics; China's military; China's economy; China's international image and its international relations; China's legal development and China's western regional development plans. China 2020 assesses where these issues stand today and highlights their likely trajectory over the following decade. A unique feature of this book is that it looks in particular at the policy impact, both for China and other countries, and all the most and least likely outcomes for China's development in these areas.

China 2020: The Next Decade for the People's Republic of China

Chapter 1: China in 2020: the leadership and the Party

A China that can say no but is still unhappy

The elephant in the room: the US will always be number one

The world beyond the US

China as an international player by 2020

International China in the coming decade - the two paths

The key factor: what happens within

Chapter 3: The Chinese economy in the next decade

China and the global economy

PLA: the armed wing of the Party

What are China's western regions?

Issues raised by the western regions

Development and Develop the West

Economic growth and human development in the western regions

Chongqing and Chengdu - growth pole(s) for the western regions?

Asian values and the law

Development of law in China in modern history

Elements of the legal system in China

Law versus the state in China