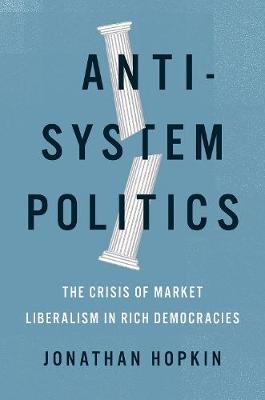 Anti-System Politics: The Crisis of Market Liberalism in Rich Democracies

Recent elections in the advanced western democracies have undermined the basic foundations of political systems that had previously beaten back all challenges-from both the left and the right. The election of Donald Trump to the US Presidency, only months after the United Kingdom voted to leave the European Union, signaled a dramatic shift in the politics of the rich democracies. In Anti-System Politics, Jonathan Hopkin traces the evolution of this shift and argues that it is a long-term result of abandoning the post-war model of egalitarian capitalism in the 1970s. That shift entailed weakening the democratic process in favor of an opaque, technocratic form of governance that allows voters little opportunity to influence policy. With the financial crisis of the late 2000s these arrangements became unsustainable, as incumbent politicians were unable to provide solutions to economic hardship. Electorates demanded change, and it had to come from outside the system. Using a comparative approach, Hopkin explains why different kinds of anti-system politics emerge in different countries and how political and economic factors impact the degree of electoral instability that emerges. Finally, he discusses the implications of these changes, arguing that the only way for mainstream political forces to survive is for them to embrace a more activist role for government in protecting societies from economic turbulence. A deeply-rooted historical analysis of arguably the most important political phenomenon in the world at present, Anti-System Politics illuminates how and why the world seems upside down.

Anti-System Politics: The Crisis of Market Liberalism in Rich Democracies