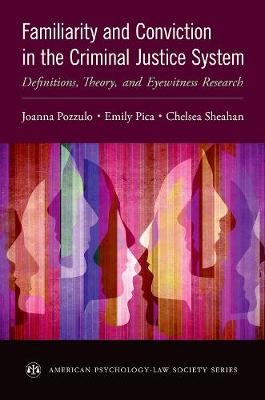 Familiarity and Conviction in the Criminal Justice System

Eyewitness research has focused mainly on stranger identification, but identification is also critical for the "familiar stranger", and understanding how variability in an eyewitness's familiarity with the perpetrator may influence recall and recognition accuracy will facilitate swifter and more just resolutions to crime. Familiarity and Conviction in the Criminal Justice System examines the notion of familiarity between an eyewitness/victim and a perpetrator, ranging from complete unfamiliarity (as with a total stranger) to a very familiar other. Authors Joanna Pozzulo, Emily Pica, and Chelsea Sheahan define what is meant by "familiarity" in an eyewitness context and how it has been operationalized and manipulated, exploring factors that may interact with familiarity and examining jurors' perceptions of it. The first half of the book draws on various sub-areas of psychology to understand familiarity against the backdrop of eyewitness identification: social psychology theories of how familiarity is established; cognitive psychology and its theories of recognition; face processing literature; and eyewitness literature. The second half of the book surveys system and estimator variables that influence identification, such as lineup procedures, interviewing techniques, the role of age, race, and more; as well as how familiarity is weighed in juror decision-making. A final chapter issues a call for continuing research examining the notion of familiarity and its impact on the criminal justice system. Pozzulo, Pica, and Sheahan's new monograph bridges the gap in knowledge between the more commonly studied 'stranger identification' and the understudied but nevertheless important problem of mistaken identifications of familiar others. * Brian Cutler, PhD, Professor, Faculty of Social Science and Humanities, Ontario Tech University *

Familiarity and Conviction in the Criminal Justice System

Chapter 5
Factors that can Interact with Familiarity: System Variables

Chapter 6
Factors that can Interact with Familiarity: Estimator Variables

Chapter 8
How Persuasive is an Eyewitness who is "Familiar" with the Defendant?