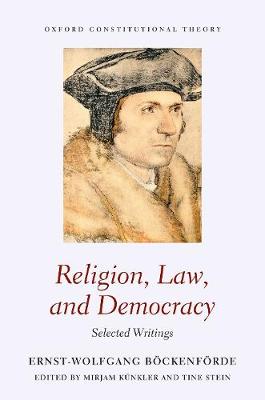 Ernst-Wolfgang Boeckenfoerde (1930-2019) was one of Europe's foremost legal scholars and political thinkers. As a scholar of constitutional law and a judge on Germany's Federal Constitutional Court (1983-1996), Boeckenfoerde was a major contributor to contemporary debates in legal and political theory, to the conceptual framework of the modern state and its presuppositions, and to contested political issues such as the constitutional status of the state of emergency, citizenship rights, bioethical politics, and the challenges of European integration. His writings have shaped not only academic but also wider public debates from the 1950s to the present, to an extent that few European scholars can match. As a federal constitutional judge and holder of a trusted public office, Boeckenfoerde has influenced the way academics and citizens think about law and politics. During his tenure on the Court, several path-breaking decisions for the Federal Republic of Germany were handed down, including decisions on the deployment of missiles, the law on political parties, the regulation of abortion, and the process of European integration. This second volume in the first representative edition in English of Boeckenfoerde's writings brings together his essays on religion, law, and democracy. The volume is organized in five sections: I. the Catholic Church and Political Order; II. State and Secularity; III. the Theology of Law and its Relation to Political Theory; IV. Norms and the Principle of Human Dignity; and V. Excerpts from a biographical interview. Sections I, II, III, and IV are preceded by an editors' introduction to the articles as well as running editorial commentary to the work.

Mirjam Kunkler: Freedom in Religion, Freedom in the State: Ernst-Wolfgang Boeckenfoerde on Religion, Law, and Democracy
Part I: Catholic Church and Political Order
Mirjam Kunkler and Tine Stein: Boeckenfoerde on the relation of the Catholic Church and Christians to democracy and authoritarianism
I: The Ethos of Modern Democracy and the Church [1957]
II: German Catholicism in 1933: A Critical Examination [1961]
III: Types of Christian Worldly Conduct during the Nazi-Regime [1965]
IV: Religious Freedom Between the Conflicting Demands of Church and State [1964-79]
Part II: State and Secularity
Mirjam Kunkler and Tine Stein: Boeckenfoerde on the Secular State and Secular Law
V: The Rise of the State as a Process of Secularization [1967]
VI: The Fundamental Right of Freedom of Conscience [1969]
VII: Remarks on the Relation between State and Religion in Hegel [1982]
VIII: The Secularized State: Its Character, Justification, and Problems in the Twenty-First Century [2007]
Part III: On the Theology of Law and Political Theory
Mirjam Kunkler and Tine Stein: Boeckenfoerde on the Relationship Between Theology, Law and Political Theory
IX: Political Theory and Political Theology: Comments on their reciprocal relationship [1981]
X: Reflections on a Theology of Modern Secular Law [1999]
XI: A Christian in the Office of Constitutional Judge [1999]
XII: On the Authority of Papal Encyclicals: the Example of Pronouncements on Religious Freedom [2005]
Part IV: Basic Norms and the Principle of Human Dignity
Mirjam Kunkler and Tine Stein: Boeckenfoerde on the Right to Life, Human Dignity, and its Meta-positive Foundations
XIII: Abolition of 218 of the Criminal Code? Reflections on the Current debate about the prohibition of abortion under German Criminal Law [1971]
XIV: Human Dignity as a Normative Principle: Fundamental Rights in the Bioethics Debate [2003]
XV: Will Human Dignity Remain Inviolable? [2004]
Part V: Boeckenfoerde in Context
XVI: Dieter Gosewinkel: Biographical Interview with Ernst-Wolfgang Boeckenfoerde [2011]