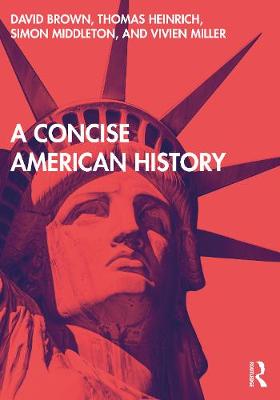 Expertly steering readers through the often tumultuous and exhilarating history of the United States, from its early modern Native American roots to twenty-first-century neoliberalism and the shifting political climate of the past decade, this highly readable textbook provides a compelling overview of American development over the last five centuries. This book avoids either celebratory or condemnatory rhetoric to present a critical examination of domestic America and its interaction with the rest of the world. Balancing coverage of political, social, cultural, and economic history, each chapter also includes a wealth of features to facilitate learning: Timelines situating key events in their wider chronology Lists of topics covered within each chapter for easy reference Concept boxes discussing selected issues in more detail Historiography boxes exploring key debates Chapter summaries offering condensed outlines of the main themes of each chapter Further reading lists guiding readers to additional resources Maps and images bringing to life important events and figures from America's history Clearly and engagingly written and positioning America's narrative within the wider global context, this textbook is particularly accessible for non-US students and is the perfect introduction for those new to US history. This textbook is also supported by a companion website offering interactive content including a timeline, multiple-choice quizzes, and links to selected web resources.


2 A provincial society in an Atlantic World


3 The revolution that made a republic


5 The growth of the white republic


6 Problems of slavery, freedom, and sectionalism in the antebellum US


7 Civil War and the wars of Reconstruction


8 Western conquest, white supremacy, and the rise of a superpower


9 The rise of imperial America


10 State building in the United States


12 From neutrality to war