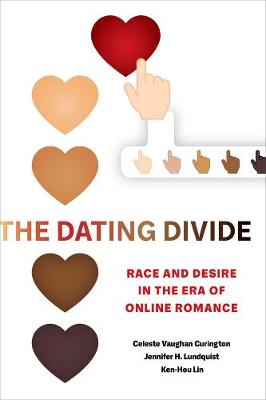 The Dating Divide: Race and Desire in the Era of Online Romance

The data behind a distinct form of racism in online dating The Dating Divide is the first comprehensive look at "digital-sexual racism," a distinct form of racism that is mediated and amplified through the impersonal and anonymous context of online dating. Drawing on large-scale behavioral data from a mainstream dating website, extensive archival research, and more than seventy-five in-depth interviews with daters of diverse racial backgrounds and sexual identities, Curington, Lundquist, and Lin illustrate how the seemingly open space of the internet interacts with the loss of social inhibition in cyberspace contexts, fostering openly expressed forms of sexual racism that are rarely exposed in face-to-face encounters. The Dating Divide is a fascinating look at how a contemporary conflux of individualization, consumerism, and the proliferation of digital technologies has given rise to a unique form of gendered racism in the era of swiping right-or left. The internet is often heralded as an equalizer, a seemingly level playing field, but the digital world also acts as an extension of and platform for the insidious prejudices and divisive impulses that affect social politics in the "real" world. Shedding light on how every click, swipe, or message can be linked to the history of racism and courtship in the United States, this compelling study uses data to show the racial biases at play in digital dating spaces.

The Dating Divide: Race and Desire in the Era of Online Romance

Introduction: Dear Tinder, Guess Who's Coming to Dinner
1. Where Hate Trumps Love: The Birth and Legacy of Antimiscegenation in the United States
2. From the Back Porch to the Computer Screen: The Rise of Choice in Courtship
3. New Rules? Gendered Online Engagement
4. A Privilege Endures: Dating While White in the Era of Online Dating
5. The Unique Disadvantage: Dating While Black
6. The Asian Experience: Resistance and Complicity
7. "Hey, You're Latin. Do You Like to Dance?": The Privilege and Disadvantage of Latino/a Daters
8. Postracial Multiracialism: A Challenge to the White Racial Frame?
Conclusion: Abolishing the Dating Divide