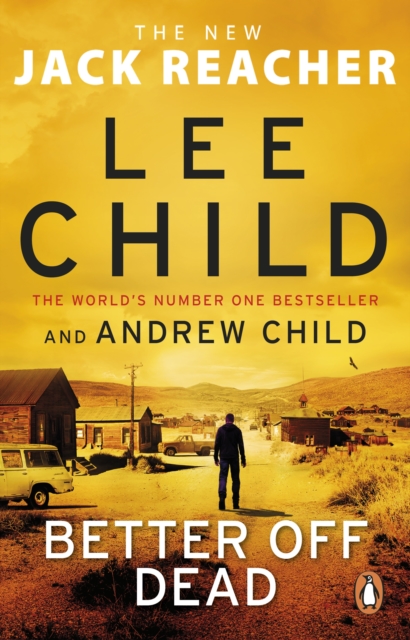 Reacher never backs down from a problem.

And he's about to find a big one, on a deserted Arizona road, where a Jeep has crashed into the only tree for miles around. Under the merciless desert sun, nothing is as it seems.

Minutes later Reacher is heading into the nearby border town, a backwater that has seen better days. Next to him is Michaela Fenton, an army veteran turned FBI agent, who is trying to find her twin brother. He might have got mixed up with some dangerous people.

And Reacher might just need to pay them a visit.

Their leader has burrowed his influence deep into the town. Just to get in and meet the mysterious Dendoncker, Reacher is going to have to achieve the impossible.

To get answers will be even harder. There are people in this hostile, empty place who would rather die than reveal their secrets.

But then, if Reacher is coming after you, you might be better off dead.

Although the Jack Reacher novels can be read in any order, Better Off Dead is the 26th book in the internationally popular series.

Jack Reacher is today's James Bond, a thriller hero we can't get enough of.' Ken Follett

'If you haven't read any Jack Reacher, you have a treat in store . . . a hitchhiker without a phone, a one-man force for good.' The Times

'A contemporary version of the knight in shining armour . . . Reacher is a mythic figure.' Literary Review

'Jack Reacher has long since earned his prominent place in the pantheon of cool, smart-talking American heroes.' New York Times