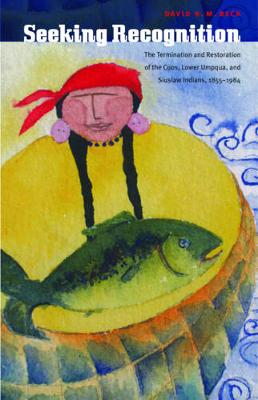 Seeking Recognition: The Termination and Restoration of the Coos, Lower Umpqua, and Siuslaw Indians, 1855-1984

In 1855 the Coos, Lower Umpqua, and Siuslaw tribes of Oregon signed the Empire Treaty with the United States, which would have provided them rights as federally acknowledged tribes with formal relationships with the U.S. government. The treaty, however, was never ratified by Congress; in fact, the federal government lost the document. Tribal leaders spent the next century battling to overcome their quasi-recognized status, receiving some federal services for Indians but no compensation for the land and resources they lost. In 1956 the U.S. government officially terminated their tribal status as part of a national effort to eliminate the government's relationship with Indian tribes. These tribes vehemently opposed termination yet were not consulted in this action. In Seeking Recognition, David R. M. Beck examines the termination and eventual restoration of the Confederated Tribes at Coos, Lower Umpqua, and Siuslaw some thirty years later, in 1984. Within this historical context, the termination and restoration of the tribes take on new significance. These actions did not take place in a historical vacuum but were directly connected with the history of the tribe's efforts to gain U.S. government recognition from the very beginning of their relations.

Seeking Recognition: The Termination and Restoration of the Coos, Lower Umpqua, and Siuslaw Indians, 1855-1984

2. The 1855 Treaty and the Beginning of Quasi Recognition

5. Amalgamation, Confederation, and the Claims Cases

10. The Achievement and Meaning of True Recognition