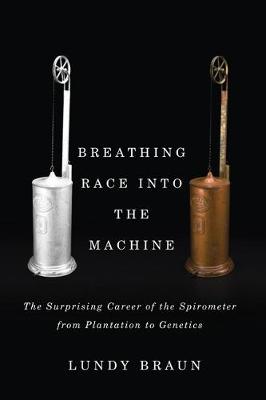 Breathing Race into the Machine: The Surprising Career of the Spirometer from Plantation to Genetics

How race became embedded in a medical instrument In the antebellum South, plantation physicians used a new medical device-the spirometer-to show that lung volume and therefore vital capacity were supposedly less in black slaves than in white citizens. At the end of the Civil War, a large study of racial difference employing the spirometer appeared to confirm the finding, which was then applied to argue that slaves were unfit for freedom. What is astonishing is that this example of racial thinking is anything but a historical relic. In Breathing Race into the Machine, science studies scholar Lundy Braun traces the little-known history of the spirometer to reveal the social and scientific processes by which medical instruments have worked to naturalize racial and ethnic differences, from Victorian Britain to today. Routinely a factor in clinical diagnoses, preemployment physicals, and disability estimates, spirometers are often "race corrected," typically reducing normal values for African Americans by 15 percent. An unsettling account of the pernicious effects of racial thinking that divides people along genetic lines, Breathing Race into the Machine helps us understand how race enters into science and shapes medical research and practice. Honorable Mention, 2017 Rachel Carson Prize, Society for the Social Studies of Science Winner of the 2018 Ludwik Fleck Prize from the Society for Social Studies of Science

Breathing Race into the Machine: The Surprising Career of the Spirometer from Plantation to Genetics