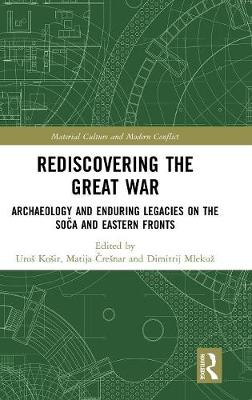 The Great War was a turning point of the twentieth century, giving birth to a new, modern, and industrial approach to warfare that changed the world forever. The remembrance, awareness, and knowledge of the conflict and, most importantly, of those who participated and were affected by it, altered from country to country, and in some cases has been almost entirely forgotten. New research strategies have emerged to help broaden our understanding of the First World War. Multidisciplinary approaches have been applied to material culture and conflict landscapes, from archive sources analysis and aerial photography to remote sensing, GIS and field research. Working within the context of a material and archival understanding of war, this book combines papers from different study fields that present interdisciplinary and multidisciplinary approaches towards researching the First World War and its legacies, with particular concentration on the central and eastern European theatres of war.

Chapter 1: The Italian Front on the Soca (Isonzo): A British Officers' military

Chapter 3: Digitising the Great War in 3D: The Remains of the Soca Front, Slovenia. Seta Stuhec and Uros Kosir.

Chapter 4: On the Border: Perspectives on Memory Landscapes between Slovenia

Chapter 5: Constructing the Italian Border: The First World War in the East of

Chapter 6: Between tourism and oblivion: Rombon and Kolovrat - conflict

Chapter 8: An Archaeology of 'No Man's Land': The Great War in Central

Chapter 13: The Heritage of the Soca Front and Collective Memory. Marko Stepec.


interpreting subjects of war - a perspective from the East.