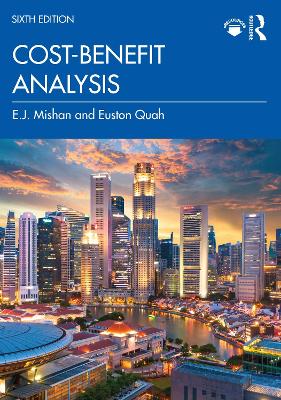 Cost-benefit analysis (CBA) is the systematic and analytical process of comparing benefits and costs in evaluating the desirability of a project or programme - often of a social nature. It attempts to answer such questions as whether a proposed project is worthwhile, the optimal scale of a proposed project and the relevant constraints. CBA is fundamental to government decision making and is established as a formal technique for making informed decisions on the use of society's scarce resources. This timely sixth edition of the classic Cost-Benefit Analysis text continues to build on the successful approach of previous editions, with lucid explanation of key ideas, simple but effective expository short chapters and an appendix on various useful statistical and mathematical concepts and derivatives. The book examines important developments in the discipline, with relevant examples and illustrations as well as new and expanded chapters which build upon standard materials on CBA. Highlights include: updated historical background of CBA extended non-market goods valuation methods the impact of uncertainty evaluation of programmes and services behavioural economics decision rules and heuristics CBA and regulatory reforms CBA in developed and developing countries value of household production other topics frequently encountered in CBA, such as costs of diseases and air pollution, and value of statistical life. This book is a valuable source and guide to international funding agencies, governments, interested professional economists and senior undergraduate and graduate students. The text is fully supported by a companion website, which includes discussion questions and PowerPoint slides for each chapter.

PART I
Scope and method