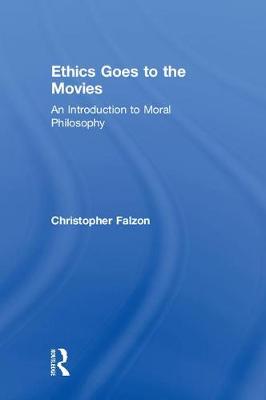 Ethics Goes to the Movies

Movies hold a mirror up to us, portraying the complexities of human reality through their characters and stories. And they vividly illustrate moral theories that address questions about how we are to live and what sort of people we ought to be. In this book, Christopher Falzon uses movies to provide a rich survey of moral positions as they have emerged through history. These include the ethics of the ancient world, medieval ethics, Enlightenment and Kantian ethics, existentialist ethics and the ethics of the other. Each theory is explained in detail, using a number of examples from the book's wide selection of movies. The discussion draws on a range of recent and not-so-recent films, from Hollywood blockbusters to art-house cinema. Key Features: In addition to covering thinkers one would expect in an introduction to ethics (e.g., Plato, Aristotle, Kant), the book discusses less canonical figures in detail as well (e.g., Marcuse, Foucault, Habermas). Similarly, the book examines both major ethical theories (e.g., Kantianism, utilitarianism, virtue ethics) and theories too often glossed over in introductory texts (e.g. Stoicism, Epicureanism, Habermas's discourse ethics and Nietzschean ethics). A wide range of movies are discussed, from Hollywood blockbusters and classics like The Dark Knight, Casablanca and Dirty Harry to lesser known films, like Force Majeure and Under the Skin. Atthe end of each chapter a focus on two feature films is included, with a plot summary and interpretations of several key scenes with a time marker indicating when in the film the scenes occur. A Filmography includes all movies discussed in the book and a Glossary covers key philosophical terms and figures; both with corresponding page numbers. 'Christopher Falzon has written another exemplary book, which makes an important contribution to introducing students and the general public to the basic areas of ethical theory. His vast knowledge of films, from the silent era to the present day, provides an accessible way to engage the reader and clarify moral dilemmas.' -Timothy J. Madigan, St John Fisher College, USA "Teaching ethics will never be the same after Ethics Goes to the Movies. This ingenious volume uses a wide range of fiction films to introduce students to all the major ethical theories. Organized historically, the book shows that films from Casablanca to Get Out are concerned with the same issues that animate the ethical theories of philosophers from Plato to Foucault. The detailed analysis of a few films aft

Ethics Goes to the Movies


Feature films: Dr Jekyll and Mr Hyde, and Under the Skin


The problem of evil


Feature films: Crimes and Misdemeanors, and The Addiction


Hobbes and the social contract


The libertine and scientific morality


Feature films: High Noon, and No Country for Old Men

Chapter 6. Encounters with aliens: Ethics and the other


The critique of 'traditional' ethics


The ethics of care


Levinas and the ethics of the other