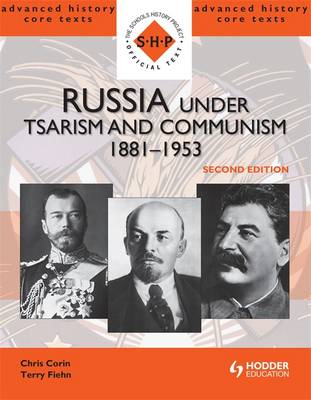 Depend on SHP's comprehensive and best-selling core texts to enrich your understanding of A Level History. SHP Advanced History Core Texts are the Schools History Project's acclaimed books for A level History. They offer: - clear and penetrating narrative - comprehensively explaining the content required for examination success - thought provoking and relevant activities that explore the content and help students think analytically about the subject - thorough exam preparation through carefully designed tasks that address the distinctive requirements of A Level history including guidance in essay writing and source-based investigations. - a wide range of revision strategies including structured content summaries Additional features include: - A focus route pathway for independent learners - Learning Trouble Spots - which address common misunderstandings - diagrammatic summaries of key areas of content and historical issues - accessible summaries of recent historical debates. - active learning approaches, including decision-making exercises Russia under Tsarism and Communism 1881-1953 this title is a comprehensive core text on Russian history from 1881 to the death of Stalin. It is a second edition of the bestselling Communist Russia under Lenin and Stalin. This second edition is extended to cover the Tsarist pre-revolutionary period. Major themes include - the nature of Tsarist rule in Russia and the causes and consequences of the 1905 revolution; - the causes and consequences of the Russian Revolution in 1917; - the nature, the achievements and failures of Lenin's and Stalin's Communist regimes; - the ongoing historiographical debate about this period and the current reinterpretations of it. Other improvements for this second edition include more streamlined coverage of Stalin's foreign policy.

: SECTION 1: WHY DID THE TSARIST REGIME COLLAPSE IN 1917?
1.: What were the challenges facing the tsarist regime at the end of the nineteenth century?
2.: 1905
3.: Could Tsarism have survived? 1906-1917
: SECTION 2: WHY WERE THE BOLSHEVIKS SUCCESSFUL IN OCTOBER 1917?
4.: Was the Provisional Government doomed from the beginning?
5.: Was the Bolshevik seizure of power in October 1917 inevitable?
: SECTION 3: THE CONSOLIDATION OF THE BOLSHEVIK STATE 1917-24
6.: How did the Bolsheviks survive the first few months in power?
7.: How did the Bolsheviks win the Civil War?
8.: How was the Bolshevik state consolidated between 1921 and 1924?
: SECTION 4: FROM LENIN TO STALIN
9.: How significant is Lenin's contribution to history?
10.: How did Stalin emerge as the sole leader of Russia?
: SECTION 5: HOW DID STALIN TRANSFORM THE ECONOMY OF THE USSR IN THE 1930S?
11.: Why did Stalin make the Great Turn?
12.: Was collectivisation a success?
13.: How well planned were the Five-Year Plans?
: SECTION 6: HOW DID STALIN CONTROL THE USSR?
14.: How far was Stalin responsible for the Great Terror?
15.: The cult of the personality
: SECTION 7: SOVIET SOCIETY IN THE 1920S AND 1930S
16.: Were Soviet culture and society transformed by the October Revolution?
17.: Culture and society in a decade of turmoil
: SECTION 8: FROM PARIAH TO SAVIOUR: THE SOVIET UNION AND EUROPE 1921-1945
18.: Alone in a hostile world: how did Soviet foreign policy develop between 1921 and 1941?
19.: How was the Soviet Union able to turn disaster into victory in the Great Patriotic War?
: SECTION 9: STALIN'S FINAL YEARS AND CONCLUSION
20.: Stalin's final years 1945-53
21.: Conclusion